Most vines scare me because I’ve convinced myself that world domination is their long-term goal. But clematis, though they are vines, mostly just confuse me. They can’t decide if they want to be a vine, a shrub or a perennial. Then when the hybridizers get their hands on them, they get really confused and confusing. Plants such as Blue Boy Clematis (Clematis integrifolia “Blue Boy”) are proper vines, but they die to the ground each winter like a perennial. 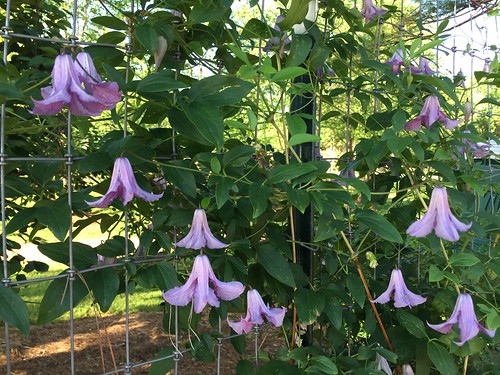 Clematis belong to a large group of almost 300 species of plants of the Ranunculus family scattered throughout temperate regions of the northern hemisphere. They range from evergreen vines to woody shrubs to herbaceous perennials, with countless gradations between these various growth forms. But most-often gardeners think of them as weak climbing deciduous vines. In its wild form, C. integrifolia is native throughout much of Europe and Central Asia.

Blue Boy clematis is an intermediate sized vine growing six or so feet tall with opposite, trifoliate compound leaves produced up the stems. The tidy leaves are on the smaller end of the spectrum for a clematis with leaflets about 2 inches long. Vines emerge early from the crown and grow quickly, reaching the top of my 6-foot-tall deer fence by mid-May. This hybrid is not technically a self-supporting climber, unlike most clematis, but it has no problem making its way up the deer fence with its 2 x 4-inch wire grid.

The blue flowers have four petals and are down-facing, and grow to about two and one-half inches across. Flowering is, here in Arkansas, concentrated in late spring, but a few blooms are produced during the summer as the plant makes new growth. Though I have not tried it, shearing the plant back half way is said to flush a second round of flowering but the blooms are smaller.

Blue Boy was hybridized by Frank L. Skinner (1882 – 1967), a nurseryman from the prairie region of Manitoba, Canada, back in 1947 but it was not until the 1990’s when it gained much of a following in the clematis world. He crossed C. integrifolia x C. viticella to create Blue Boy. He was an active breeder and developed cold hardy fruit trees, roses, peonies and other ornamental crops.

Like other C. integrifolia hybrids, Blue Boy is best managed with a Type C pruning regime. Because flowers are produced on new growth, the plant can and should be cut to the ground each winter and the old vines removed. Cutting back during the growing season should encourage new growth, so new flowers will be generated from this growth.

Clematis do best in bright locations – including full sun – but they are intolerant of drought and heat stress. So, the more sun exposure they have in the south, the more important it is that they have a rich soil that is well mulched and has a ready supply of moisture. Many references refer to clematis needing an alkaline pH. Such is not the case. Most do best with a slightly acidic to neutral pH.

For more information about horticulture or to see other Plant of the Week columns, visit Extension’s Website, www.uaex.uada.edu, or contact your county extension agent. The Cooperative Extension Service is part of the University of Arkansas System Division of Agriculture and offers its programs to all eligible persons regardless of race, color, national origin, religion, gender, age, disability, marital or veteran status, or any other legally protected status, and is an Affirmative Action/Equal Opportunity Employer.