I’ve always been interested in commerce, but lack sufficient mercenary drive to do anything about it. A common thread amongst those throughout history who have become fabulously wealthy is their ability to find a market for something cheap to produce that people will pay ridiculously high prices for. Think diamonds. Or better still, consider spices such as cinnamon (Cinnamomum cassia), which were one of the components of the spice trade that lead to such profound changes in the world. 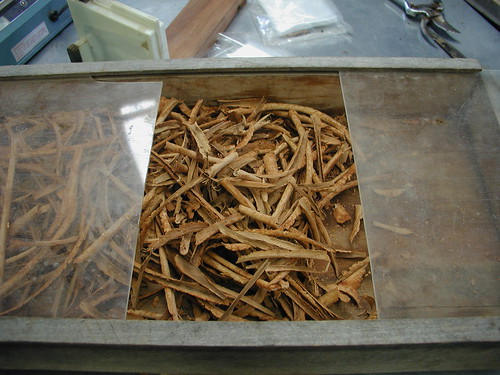 There are about 250 species of cinnamon scattered in the tropics around the world and all have some cinnamon-like characteristics. They are members of the Laurel family. Cinnamomum cassia, the primary cinnamon we use in the United States, is one of about half dozen species of cinnamon cultivated throughout South Asia from tropical China, Indonesia and Viet Nam, to Shri Lanka in India.

The trees grown for cinnamon bark extraction are evergreen trees growing 30 to 40 feet tall with a rounded crown. Leaves are shiny, four to six inches long and marked with three prominent veins running the length of the leaf.  New growth is flushed with red that turns green as the leaves begin to mature.

The inner bark is the product of commerce with the two to six-inch curled brown “quills” of cinnamon the first stage of processing. More commonly these are ground into a fine powder or a steam distilled oil may be produced.

Cinnamon plantations use a “coppice” production system where plants are cut to the ground every other year. While still green, the outer bark is scraped off and the stem pulverized so that the bark can be peeled, separating at the cambium region between the xylem and phloem cells. From these strips of bark, only a 0.5 mm thick portion of young phloem cells and cambium is peeled away to produce the quills.

Cinnamon has been a trade item for at least the last five thousand years. It was an ideal product for early trade because it was cheap to produce in its native range, light weight for transport, traveled well as long as it was kept dry and, once the market was developed, had a high market demand with corresponding high prices. Up until medieval times, a small quantity of cinnamon would cost the equivalent of a week’s wages for a laborer.

Originally cinnamon bark was traded along a network of routes from China’s famous Silk Road in the north to sea routes from southern India to the Red Sea and the Horn of Africa. Arab traders were the merchants of the day and responsible for introducing many tropical spices into the Mediterranean region. Fantastical stories grew up around the source of cinnamon and what lengths traders had to go through to procure it. By maintaining a front of misinformation about their product, they kept the competition down.

The Age of Discovery, kicked off by the Portuguese in the late 15th century, lead to a rush of discoveries that saw ships traveling down the coast of Africa and into the Indian Ocean by 1497. Columbus, as we all remember, arrived in the Americas in 1492, looking for a shortcut to the spice islands. Chili peppers are called such because they were seen as a substitute for the black peppers of the East. I can still spot a real Mexican taqueria because they seldom have black pepper shakers on their tables, only salt.

Though we can’t grow cinnamon trees in our gardens, it is one of the plants that has had a profound effect not only on the gastronomy of the world but also world history.