Learning new plants is harder than it used to be. I’m still interested and enthusiastic, but they don’t stick quite as well as they used to. Honeywort or blue shrimp plant (Cerinthe major “Kiwi Blue”) is one that has intrigued and impressed me, but learning of it and its ways in the garden has been slow to come. 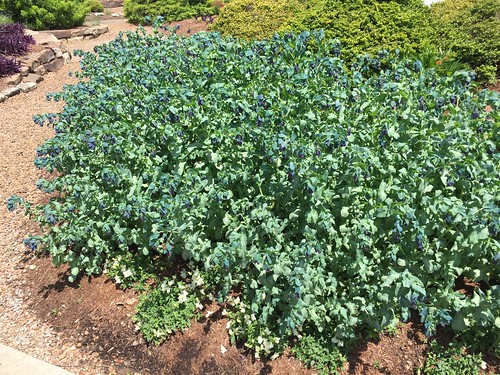 Though I didn’t know honeywort when I first saw it planted here at the Botanical Garden of the Ozarks, I recognized it as a member of the Borage family as soon it bloomed. It is one of six species native to the Mediterranean region where it grows as a winter annual or short lived perennial. But in Arkansas it is best treated as a cool season annual, planting out in mid spring and pulling out by early summer.

“Kiwi Blue” and “Blue Belle” are the only cultivars I find listed at the present time. They grow about 18 inches tall and wide with upright branches that arch at the tip, giving it a mounded form. The leaves are 2-3 inches long, glaucous gray in color with white stripes down the leaf during the early season. Leaves lack a petiole and clasp the stem. The foliage effect is coarse and rubbery but the blue-gray effect blends well in the overall landscape.

Flowers appear in a terminal, one-sided, bract-enshrouded cyme. In most members of the borage family the blooms are produced in what is called a “scorpoid cyme,” reminiscent of the arched tail of a scorpion. Though not as pronounced as some, you can still easily see the family resemblance.

Individual flowers are purple bells just under an inch long that begin appearing in late spring and continue until hot weather arrives. The leaf-like bracts subtending the flowers are purple-tinged and remain effective even after the plant is out of bloom.

Honeywort has been around, but it appears to have found a new audience in the past few years as people have become more interested in bees. In England it is being promoted as a bee plant by the Royal Horticulture Society.

First described and named by Linnaeus in the 1750’s, this plant has had an uncharacteristically stable history of no name changes. I find it mentioned by Bailey a century ago in his Cyclopedia, but none of my other garden references mention it, even as late as 2000. It seems to have survived as a pass-along plant in England and the Pacific Northwest where it self-sows enough to keep it around.  Then with the interest in bees, it made its way back into the gardening world.

The association with bees is an old one. The Latin name is a translation from Greek of “wax” plus flower. Waxflower, an old name for the plant, was used because the ancients believed that bees collected wax from honeywort (another bee-associated name) to make their cones.

Honeywort is best grown much as you would grow broccoli. Plant the seeds inside in late winter and grow transplants with the aim of planting them out once the coldest weather of winter is past. Hardened plants should be able to take springtime frosts and freezes down to 20⁰F with no problems. It is easy to grow, tolerating an array of soils without fuss. It is best in full sun but will tolerate moderate shade.

On the Internet, people brag about it blooming through the summer, but they write from the areas with a maritime climate. In the heat of the midsouth, it begins to stretch out, look ratty and is usually pulled out in June.