Soon the lead will stop flying and it will again be safe to go back into the Arkansas woods. Exploring the woods in the winter — when I don’t have to worry about ticks — makes it one of my favorite seasons. Some trees, such as musclewood (Carpinus caroliniana), are easier to identify in the winter than any season because of their singular trunks. 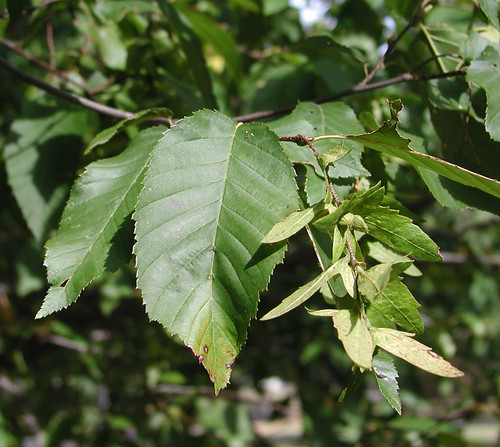 Carpinus is a genus of about 40 species of small deciduous trees of the birch family found in the understory of forests of the northern hemisphere. The American hornbeam is the only species found in North America with the others found in China, Japan, India and Europe. In North America it ranges from Nova Scotia, through the eastern woodlands, but shunning the prairie states, and southward into the highlands of Mexico and Central America. In Arkansas it is only absent from the gulf coastal plain and Mississippi River floodway.

It is a relatively slow growing tree that grows to 25 feet tall and wide with a rounded head at maturity. The trunk is smooth, grayish in color and often lichen blotched and tightly held to the hard, muscular wood. The common name hornbeam is taken from the fact the wood is hard like a horn and the old English word “beam,” which was synonymous with tree.

Musclewood has two to three-inch-long, simple ovate leaves with doubly-serrate margins that resembles a “typical” leaf if you were to look the term up on line. In the fall it has yellow to orange-red fall color with individual trees varying markedly in their display.

In the spring a pair of male catkins are produced which pollinate the female flower that consists of between three and 20 florets. These mature into a loose cluster of inch-long, three-lobed leafy bracts, each bearing a hard, triangular nutlet. When the fruiting structures dislodge from tree in the fall, the bracts provide some airborne mobility to disperse the seeds.

Musclewood is one of the 80 species of our native trees with a close kinship with the trees of China, and in this example, Europe. The explanation for this disjunct distribution pattern involves continental drift, the formation of the Atlantic Ocean and other events that occur in a geologic time frame.

The geological record left as fossil remains are scanty for Carpinus in North America, but show that closely related species occurred in the Pacific Northwest sometime between 55 and 23 million years ago (the Paleogene). Identifiable fossil remains of musclewood in Eastern North America are very rare, with only one, 3 million-year-old site in Alabama showing preserved specimens. The authors of that discovery speculate that the worldwide glaciation that occurred during that period may have pushed the species south for safe harbor. Then, with the warming, subsequent population expansion occurred to expand distribution to its current range. Or maybe they just haven’t found enough fossils yet.

Musclewood is a worthwhile tree for the contemporary landscape and is hardy from zones 3-9. While it occurs naturally in the shade, it will grow in sunny sites as long as not overly stressed for summertime water. Its slow rate of growth makes it suitable for use as a small specimen or for pleaching into a medium to large hedge. Pruning to maintain a pleached shape should be done in early spring with only one pruning cycle needed per year to maintain size.