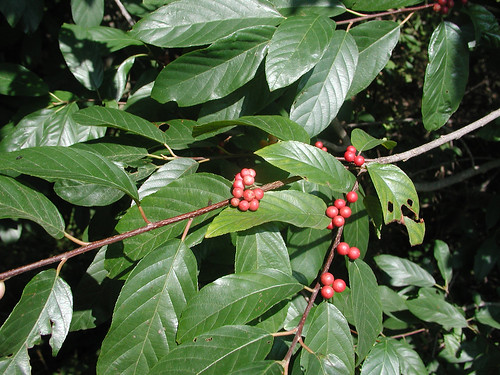 Carolina buckthorn is a large deciduous shrub native throughout much of Arkansas except for counties along the Mississippi River. (Image courtesy Gerald Klingaman)

FAYETTVILLE, Ark. -- One of the things that attract me to plants is that they are so multifaceted. From every angle you get a different perspective. The relatively inconspicuous Arkansas native shrub known as Carolina buckthorn (Rhamnus caroliniana) is, on the surface not all that interesting, but by digging a little deeper I found a connection to an Elbert Little, Jr. who was born in Fort Smith in 1907.

Carolina buckthorn is a 10- to 15-foot tall, low-branched deciduous shrub belonging to the buckthorn family. This buckthorn family and the 150 species classified in this genus are of worldwide distribution, which is unusual, and indicates either early evolutionary development before the supercontinent broke up or a good seed dispersal mechanism, in this case probably birds.

The buckthorns are sometimes divided into two separate species with Carolina buckthorn listed as Frangula caroliniana. Botanists intent on splitting the genus classify those with four flower petals in the genus Rhamnus and those with five petals as Frangula.

Carolina buckthorn is a sparsely branched shrub with 4- to 5-inch-long simple leaves with distinctive deep incised veins on the upper leaf surface. Unlike some buckthorns, this species does not have any thorns on the branches. Leaves are a glossy green in color, shallowly serrate on the margins and can produce a short-lived display of yellow fall color late in the season.

The small white, five-petaled flowers are produced along the stems after the leaves emerge so are seldom noticed when they bloom in early summer. By late summer pea sized red fruit form which, when they ripen to black after frost is sweet and favored by birds. Three seeds are found in each berry but germination is not prolific and in a garden setting seedlings are seldom found.

This species is distributed in the southeastern states from the hill country of central Texas to the western slopes of the Appalachian Mountains in Virginia. Looking at the U.S. Department of Agriculture distribution map it is easy to determine the plant is of southeastern distribution, but their records are based on state appearance and only provide a broad brush approach affording no detail.

A much clearer understanding of species distribution is provided by the U.S. Geological Service range maps which are used in modeling vegetation, climate and soil interactions. A search for “USGS plant range maps” will get you to the site where these enhanced distribution maps are given. It turns out these maps are mostly based on work done by Elbert Little, Jr. (1907 – 2004) during the 1960s when he compiled detailed maps based on county data of plant distribution and published them in his multiple volume Atlas of United States Trees published by the US Department of Agriculture. The USGS has digitized these maps and has them available for all on the internet.

Elbert Little was born in Fort Smith but raised upriver in Muskogee, Oklahoma. After receiving advanced degrees in botany he made his way to Washington, D.C., during World War II, where he worked for the USDA Forest Service, eventually rising to the rank of chief botanist.

During his career he became an international authority on trees, eventually publishing 25 books on the topic. Much of Little’s work was the basis for the state tree guides published during the 1960s including our own beloved Trees of Arkansas by Dr. Dwight Moore. Now 50 years after the Little plant distribution map work was finished it is finding a new audience in the digital age.

Though only offered by native plant growers, Carolina buckthorn is suitable for woodland gardens and edge-of-woods locations.  It grows best in light shade in well-drained bottomland soils.