Creating gardens that satisfy our need for creature comforts is part of the art of garden making. In the South, that means shade. Got to have it. But shade creates its own set of challenges, given that lots of plants, especially grasses, want full sun. If you want a lawn in the shade, you are pretty much out of luck. Sedge lawns, however, are a possible solution to this problem. Pennsylvania Sedge (Carex pensylvanica) is one of the sedges that might fill the bill. 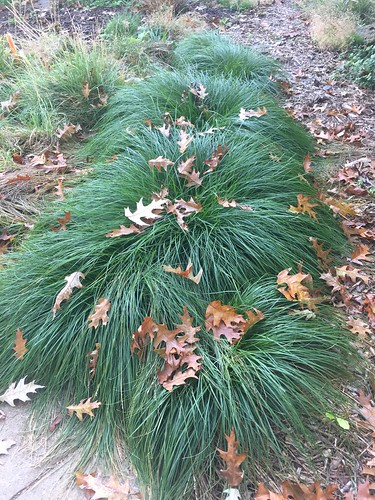 Pennsylvania sedge, or oak sedge, a second common name, is one of the 2,000 grass-like plants in the genus that is found worldwide. Pennsylvania sedge is native to North America, ranging from eastern Canada and most of the eastern United States, but becoming less common in hotter, drier sites of the south. It is found in Arkansas, but only in a few counties.

This is a cool season evergreen sedge that is clump forming but spreads 3-6 inches a year by underground rhizomes. It produces 16-inch-long, eighth-inch-wide deep green leaves that arch over as they grow. Like all sedges, the only stems are below ground except when the flower spike appears.

Flowering is in May with spikes growing to 10 inches tall. It has monoecious flowers with male pollen produced at the end of the spike and a few nutlets of seeds clustered below this on the stem. Flowers are not especially pretty, but they are not off-putting either.

Identifying sedges — with about 480 described in North America and more than 130 in Arkansas — is difficult at best. To my untrained eye, I always thought sedges looked more primitive than grasses. The old notion that grasses evolved after the age of the dinosaurs has fallen way when dinosaur poop (coprolite) fossils have been shown to contain some seeds that look a lot like rice and bamboo fibers. Estimates now push the date of grass appearance in the steam of life back to 120 million years, and sedges may be even older. Being herbaceous, neither grasses or sedges make good fossils, so conjecture is allowable.

The modern notion of creating sedge lawns started with the native plant and new plant movement of the 1990’s. I have yet to see my first sedge lawn, but I can easily see how plants such as the Pennsylvania sedge would make a good grass substitute. A number of other species with fine, grass-like leaves are also recommended.

Sedge lawns would be for only moderate foot traffic areas and for those pursuing a sustainable lifestyle, meaning they want to do less lawn mowing. Usual recommendations are to mow sedge lawns only two or three times a year.  Because Pennsylvania sedge begins growing early in the spring, make the first mowing in March to tidy up the plants before the new growth begins.

Pennsylvania sedge is best in average garden soil with moderate to heavy shade. It will grow in full sun but will require more water and would probably be invaded by bermudagrass in most Arkansas locations. Seed germination is apparently difficult so most recommendations call for plugging small container grown plants into the lawn on 6-12-inch centers. The site needs to have any established perennial grasses killed out before planting. Being a cool season plant, fall, late winter or early spring planting all work. Once established it has good drought tolerance. Coverage should take about two growing seasons.