I go through phases where my interest leads me to join societies. Over the years I’ve belonged to the holly society, the daffodil society, the penstemon society, rock garden society, the azalea and Rhododendron society.  ome plants I develop an interest in don’t have a society to join, but I’m still interested. The sedges (Carex) fall in this category. Gray sedge (Carex grayi) is currently producing its odd seed pods in my back yard, so let me tell you about it. 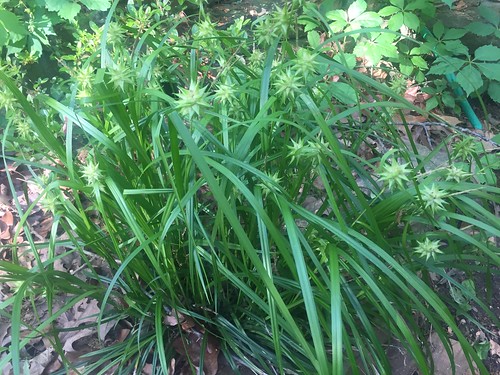 The sedges are grass-like plants found scattered throughout the world with more than 2,000 species described.  hey are clumping or running perennial herbs with their stems typically triangular at their base, and sharp edged leaves. Mostly they are associated with sunny, wet locations. Though they are eaten by grazing animals, only a few species are used as livestock forage. Gray sedge is found throughout the eastern states, including Arkansas, but its greatest density of spread is found in the upper Midwest.

Gray sedge, also called bur sedge or morningstar sedge, is a broadleafed sedge with arching leaves growing to two-foot-tall and forming a tight clump up to a foot across at the base. Leaves are to half inch wide and a foot or so long with several corrugated ridges running the length of the blade. The leaves are sparingly produced up the triangular stem as it elongates.

At the top of the stem (culm) a pair of globe shaped, female spikelets with 10-30 inflated, cone shaped perigynia are produced in a round orb an inch to an inch and a half across. New flowers are produced in greatest number in the late spring (May) but continue to appear through the summer if the plant keeps growing.

The perigynia, though it looks closed on the tip, is actually a two-lipped structure that allows pollen to enter from the cigar-shaped staminate flower that protrudes from the larger female flower at a jaunty angle. When the seeds ripen the perigynia breaks apart and allows the seeds to disperse in their own inflated life raft.

The common names bur sedge and morningstar sedge refer to the globe shaped female flower. A morningstar was a medieval club shaped weapon similar to a mace that looks like this sedge’s seed capsule. The common name Gray sedge makes reference to Asa Gray (1810-1888), the Harvard botanist who first compiled a near comprehensive flora of North America.

Gray sedge is an interesting plant that can be used at or near the water’s edge or planted in rain gardens that periodically flood and then drain away. It will grow in full sun to moderate shade, though heavy shade is not to its liking. It has some drought tolerance but severe drought will force it into dormancy in the late summer. If grown in a semimoist location it will often be semi-evergreen.  Plants may be planted from seed collected in the fall or from springtime division. Plants are hardy from zones 5-9.