Over the past 50 years I’ve spent a lot of my life sorting slides — and now digital images — of plants.  I try to file my plant photos by their Latin names, but sometimes I just dump them in a folder with their genus name, being unable to untangle their true identity.  My Carex file is that way.  Fortunately, sometimes good and useful plants such as Cherokee sedge (Carex cherokeensis) stand out enough to be identified as to species. 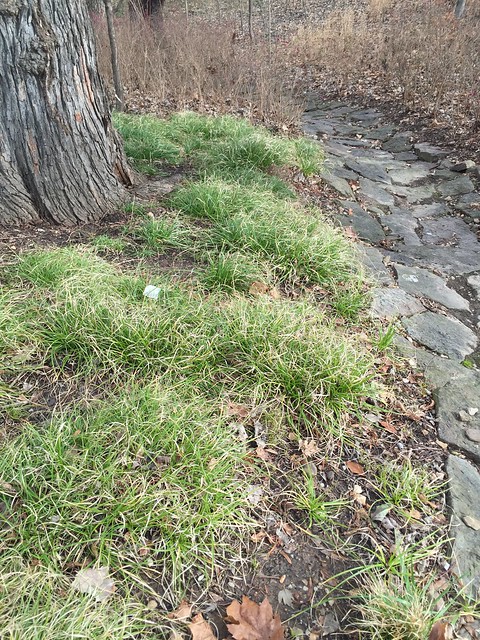 Sedges are a confusing group of about 2,000 species of grass-like plants in the Cypress family, native throughout most of the world.  In Arkansas we have about 130 species, including the Cherokee sedge, which ranges in the southeastern states from east Texas to Virginia and south to northern Florida.

Cherokee sedge is a woodland and woodland edge species, mostly found in moist sites with some shade during the hottest part of the day.  Plants have slender, arching, 16-inch-long and quarter-inch-wide evergreen leaves that are produced at the growing point of the slowly-creeping rhizomatous base in a triangular, three-ranked fashion common to all sedges.  In the winter, clumps are 6-8 inches tall, but as much as twice that in the summer.

Well-sited Cherokee sedge is a long-lived perennial and eventually forms clumps to a foot or more across.  Though rhizomatous, the plant slowly expands its footprint with time.  In mid-spring, a wispy, grass-like flower is produced that is followed by a 2-inch-long, wheat-like greenish head of seeds in early summer.

Sedges are a complicated group of plants to identify because they can only be accurately identified by inspecting blooming plants.  They are also among the most genetically unstable plants in the flowery kingdom, with chromosome numbers varying from six to 66; some species even have variation in chromosome number amongst different populations.

Sedges grow in a variety of habitats from the cold arctic tundra to the muck of a shallow pond.  Most, including the Cherokee sedge, prefer moist soils but will tolerate periods of drought once established.  They have found widespread use in recent years among people doing streamside restoration work and now many once-uncommon species are now finding their way into the nursery trade.

Cherokee sedge is best used as a groundcover or edging plant in the shade garden.  It is not yet commonplace at local retail nurseries but is available from online sources.  Plants may winter burn some in the coldest months, but cleanup is best done by a modest shearing back, not a hard cutback to the ground.