Thomas Jefferson, our third president and certainly one of the favorites of gardeners everywhere, wrote, "The greatest service which can be rendered any country is to add a useful plant to its culture." A new plant is a legacy – a gift that keeps on giving. Many new plants are a flash in the pan – more flash than substance – because modern market driven dynamics often over-hype and over-promise what can be delivered by these new botanical wonders. Ice Dancer sedge (Carex ‘Ice Dancer’), over the last two decades, has lived up to the promise of being a worthy, useful new plant. 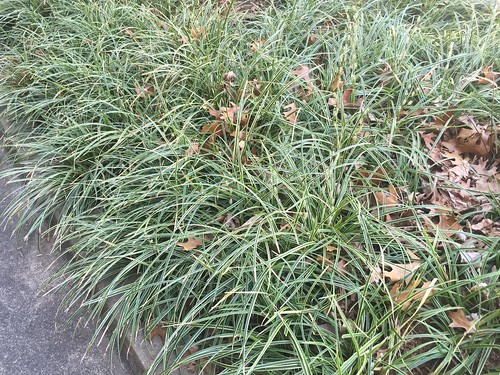 Sedges are a group of more than 1,800 species of perennial, grass-like plants of cypress family that are widely distributed in both the northern and southern hemispheres. Arkansas has more than 120 species. Gardeners often think of these plants as grasses for the shade garden because most species – though certainly not all – do best with some shade.

Ice Dancer sedge is a slowly spreading rhizomatous perennial growing to about ten inches tall with a spread that changes over time as the plant establishes itself. It has arching, evergreen, half inch wide, foot long leaves that taper to a narrow point and are marked with a band of white down each leaf margin. In spring, insignificant brownish flowers are held just above the foliage.

The true identity of Ice Dancer sedge is uncertain. Originally, and still often is listed as such, it was considered to be a selection of C. morrowii, Japanese Sedge, but that species and the similar C. oshinensis are both clump forming.

Ice Dancer sedge was introduced to the American garden world by Barry Yinger, a Pennsylvania man who has introduced many new garden plants through his long career in horticulture. He worked for two nursery firms with nation-wide distribution as their new plant’s guru, several botanical gardens, and even operated his own specialty plant nursery for almost 15 years.

Yinger introduced Ice Dancer through Hines Nursery in 1996 from Japan. Since receiving a horticulture degree from the University of Maryland, Yinger was fascinated with his Asian plants. He learned Japanese – both spoken and written – and became fascinated with a Japanese gardening tradition called koten engei. In this thoughtful and highly contemplative form of gardening, specialists seek out obscure plants with a range of variation that they find interesting. Many of the variant forms have subtle forms of foliage variegation.

Ice Dancer sedge is best in fertile, organic-matter-rich soil that is kept moderately moist during the summer. It is best with high shade where the plant gets filtered light. It spreads, making it suitable for edging or use as a groundcover. Its rate of spread is modest, neither maddeningly slow nor threateningly fast.

It is hardy from zones 5-9. In the northern end of its hardiness range the foliage may be burned back from the tips. Shearing back tattered old growth in the spring before growth begins will keep the plant tidy. Sedges are considered deer resistant and this plant seems unbothered by any particular pests.