The times they are a changing. As the wealth gap widens in America, the “local” movement seems to be growing stronger every year. Farmer markets, expensive and trendy local grown restaurants, and micro-breweries are prominent examples of the go-local movement. But there are other possibilities. Locally grown tea (Camellia sinensis) will perhaps be another choice. 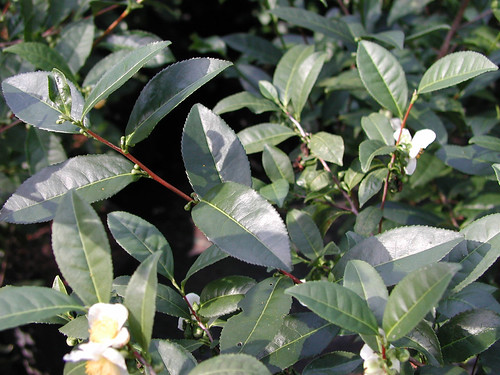 Southern gardeners are familiar with the camellias of our gardens but may not realize that the sweet tea favored in the region is also a camellia. This plant, one of about 120 species found in east Asia, is native to China and has been consumed there for at least 2200 years.

Tea is an evergreen shrub or small tree that has small, glossy leaves and fragrant white flowers that are produced in the fall. In var. sinensis, leaves are two to three inches long with plants hardy into zone 6 while in var. assamica the leaves are three to five inches long and plants are reliably hardy only in zone 7 and south. Usually tea plants grow as densely branched shrubs four to 6 feet tall.  Plants are understory shrubs in nature and grow in moderate to heavy shade, but tea plantations are almost always in open fields in full sun.

Tea has played an over-sized role in world history. As children we learned of the Boston tea party and its role in the American Revolution. Taxation on tea exports from China in 1839, along with the refusal of Chinese authorities to allow more opium imports into the Celestial Kingdom, lead to the Opium Wars which saw China defeated and thirteen treaty ports opened to trade.

Today, companies complain bitterly about Chinese firms stealing intellectual property rights and innovations. But it has happened before, but in reverse order. Robert Fortune (1812–1880) was sent to China by the Royal Horticultural Society to collect plants. Tea, at the time, was only available from China and there were strict laws prohibiting the export of live plants and seeds.

In 1848 Fortune returned to China in the employee of the British East India Company. He dressed in a poorly fitting Chinese disguise and traveled inland (in violation of the treaty) to the tea district where he collected 20,000 cuttings. These were dispatched to India where a competing tea industry was established. By 1870 a rust fungus was devastating the coffee crop that had been started by British planters during the first part of the 19th century. As the coffee crop was destroyed, tea plantations took its place and the British people became the tea drinkers we think of them today.

In 1858, the US Commissioner of Patents: Agriculture hired Fortune to collect tea plants for this country. He sent 26,000 seedlings to Washington, DC where two newly built propagation greenhouses had been erected on the Mall to receive them. The American tea industry had its beginning in and around Charleston, SC in the 1850’s. In the century and a half since then it has survived but never really flourished. For a time in the 1990’s Sam’s Choice Instant Tea was made from South Carolina tea, but mostly American tea production has been small scale. Today trial plantings are said to be occurring in Georgia, Alabama, Mississippi and Hawaii.

Tea plants are available from mail-order sources. Plants can be used for massing in the landscape or as a part of the mixed shrub border. They should have a good garden soil supplemented with organic matter and kept well watered until established. Once established, tea plants have good drought resistance. Shearing to maintain size can be done at any season.  If the intent is to harvest leaves to make tea, leaves are shorn off every few weeks during the summer during periods of active growth.