Plant of the Week: Caladium Candidum

With the abundant rainfall the 2017 summer has provided, my shady backyard garden luxuriates in shades and textures of green. Almost too much green. Liking to keep things simple, I planted a bed of impatiens and a large pot of caladiums. The Caladium I chose is the old favorite, Candidum. 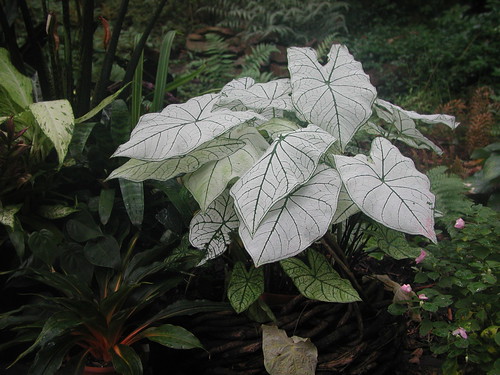 Fourteen species of Caladiums are found in Central America and the Amazon basin of South America, from where the first species were collected in 1773. The caladiums of our gardens are all hybrids with more than 2,000 named kinds described over the 150 years since breeding began in Europe.

Caladiums are frost-tender tuberous (referred to as “bulbs” in the trade) perennials that divide freely and form a dense crown in a single growing season. From the crown emerges a number of stout petioles supporting eight to 14-inch-long leaf blades that are marked with large expanses of white, pink, rose and red. The wild species are mostly green with spots and splashes of color while the hybrids are almost completely colored with only veins and leaf margins chlorophyll containing.

Two broad types of hybrids are grown. The fancy leafed cultivars, usually growing 12-18 inches tall and wide, have an oblong leaf and a heart shaped outline. The strap or lance-leafed cultivars are usually smaller, seldom exceeding 12-14 inches in height, with narrower, thicker leaves and more pronounced ears on the apex of the leaves. Both types have the full range of leaf colors.

Caladium flowers are of no particular ornamental interest but adhere to the typical spathe and spadix configuration of the aroid family.

The first caladium breeding efforts began in France in the 1860’s by the incredibly important nurseryman Louis Van Houtte (1810 – 1876) and Alfred Blue. During this period four additional species were introduced to these early breeders by German plant explorers traveling in Brazil. From these early efforts, Van Houtte’s selection Candidum is still grown today.

But it was the Columbian Exposition, the 1893 Chicago World’s Fair, where Americans became acquainted with caladiums. A German plant breeder, Adolph Leitze who was working in Brazil at the time, exhibited a collection of 400 selections to the millions of people who visited the fair. A decade later breeding efforts began in Florida and after the close of World War II, the area around Lake Placid, FL became the caladium capitol of the world. Today about 1,200 acres of caladiums are grown there in the moist, mucky soils of central Florida.

Caladiums are well suited to grow in garden beds or in planters. In late winter, unsprouted tubers are sold in the mass market outlets. Potted plants in four to 6-inch containers can be purchased from retail nurseries later in the spring.

I’ve occasionally had trouble getting caladium tubers to sprout in the spring.  This can usually be traced back to either a cold snap in the production area during mid-winter or the tubers being inadvertently chilled during shipping. Temperatures below 45⁰F can cause a four to six week delay in sprouting.

Caladium are best in a highly organic, well-watered planting site. They tolerate full sun or shade, provided the soil is kept moist. Usually the lance-leafed cultivars are better suited for the more exposed, windier sites while the fancy-leafed selections are better with some protection.

Caladium tubers can be saved from year to year, but usually the size of the clump declines after a year or two. In areas that experience an actual winter, tubers must be lifted with the first light frost, dried and then stored where they can be kept around 55⁰F over winter. Excessive dryness during wintertime storage can also damage the tubers.