I’ve been thinking about getting my DNA tested. I know all the stories of our family history, yet I’m still curious if there might be unknown relationships to be untangled. Plants also have complicated backgrounds, probably none more confused than the Brassicas, or cole crops, as they used to be called. Broccoli, cauliflower, kale, turnips, rape and the cabbages, both the usual kind and Chinese cabbage (Brassica rapa var. pekinensis) and many more are all part of this confusing stew. 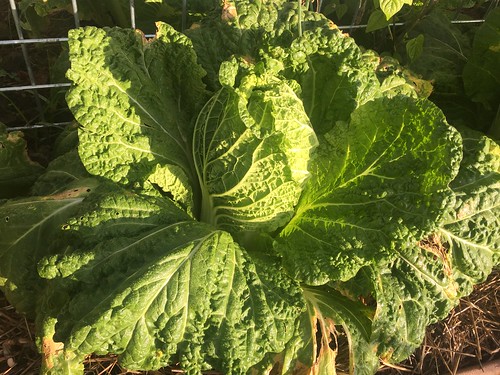 As in Europe, cole crops have been long cultivated in China with the various types grown for millennia. Chinese cabbage, also called napa cabbage, has broad, light green, often corrugated leaves with broad white midribs and foot long, football shaped heads. When cut in half, the interior part of the head is usually a creamy yellow or white. It is a cold tolerant winter annual that flowers in the spring. However, the leaves get frostbit and look unappealing, so planting is scheduled to avoid hard freezes.

Chinese cabbage has kissing cousins, bok-choy and pak-choy (both B. r. var. chinensis selections), with upright, fleshy leaf petioles. Both of these vegetables are important in Asian cultures. Chinese cabbage, for example is the cabbage used to create kimchi, the infamous fermented dish favored by Koreans. The seeds have been used as the hot mustard favored in Chinese cuisine.

In its current form, Chinese cabbage became popular in 14th century China because one of the nation’s early naturalists began touting it for its medicinal qualities. It originated in the Yangtze valley, possibly as a chance or man-made hybrid between the turnip (B. rapa var. rapa) and pak-choy. Modern day breeding trials and DNA testing confirm this origin story. The turnip parentage gives Chinese cabbage more absolute winter hardiness than European cabbage, but in practice neither are leaf hardy much below the low 20⁰F range.

My horticultural hero, Liberty Hyde Bailey (1858 – 1854), tried to sort out all of the confusion between the cole crops between 1920-1940 by giving the various forms their own species rank. It didn’t work. The two dozen species he tried to create are now divided between only four species, separated one from the other by the number of chromosomes. The turnip related plants, including Chinese cabbage, have a 2n=20 number while the European cabbage derived types, including kale, broccoli, etc., have a 2n=18 number. The other two types, often weedy or grown for vegetable oil production, have 2n=36 or 2n=38 chromosome numbers.

Chinese cabbage prefers cool growing conditions and short days. Most modern kinds have a production time of 70-90 days, while European cabbage cultivars take 80-110 days to mature. Because of this, it is probably easiest to grow Chinese cabbage as a fall crop, with seedlings transplanted into the garden in early August. Spring planted plants, especially if they have short maturation times in the 60-65-day range, can be transplanted out at the end of the hard-frost period. These tender, hot-house grown transplants are not as frost hardy as European cabbage. If they are planted too late in the spring or hot weather arrives too soon, bolting may result and the head never fully form. Chinese cabbage gets the range of pests common to cole crops, including the bothersome cabbage looper.