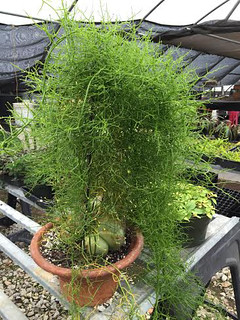 Vining Onion — The climbing onion, while not really an onion, is an interesting and easy to grow patio plant. (Image courtesy Gerald Klingaman)

FAYETTEVILLE, Ark. – We plant geeks can’t help ourselves by being attracted to the odd and unusual.  Climbing Onion or Sea Onion (Bowiea volubilis) is one such plant.  It’s perhaps more odd than beautiful but it is tough, will live for years and makes an ideal plant to add to a collection.

Climbing onion is a monotypic genus in the asparagus family from Africa where it is native from Kenya to South Africa. It produces a cluster of surface growing fleshy, yellowish green bulbs that grow from a couple inches across to the size of a softball with only the basal 10 percent of the bulb actually in the soil. From the base of the bulbs succulent roots protrude down into the soil.

From a central depression at the top of each bulb a fast growing twining vine emerges with strange leaf like appendages. These green appendages are modified leaf petioles called cladophylls, and like true leaves can fall off with age or stress. True leaves are absent. Unlike vines which twine around things or which support themselves with holdfasts, these grow upwards and entangle themselves on other nearby plants or structures. In nature Bowiea is often found growing beneath shrubby plants so this sprawling form of climbing makes sense.

During the winter and spring, six-petaled, half-inch wide, star-shaped greenish-yellow flowers are produced singly amongst the twining stems. The flowers are attractive in their own understated way but not of great ornamental appeal. Because most plants are clonally propagated, seed set almost never occurs.

In the 1867 issue of Curtis Botanical Magazine climbing onion was described thusly:  “Though possessing little beauty this is certainly one of the most curious plants ever introduced into Europe.” It was discovered by the scientific community by James Bowie (1789-1869) who collected plants in the Cape District of Africa for London’s Kew Gardens in the 1820’s.  He eventually returned to Africa as a private collector and apparently lived out his last days there in poverty.

Climbing onions, like most true bulbs, branch at the base of the bulb and slowly produce new daughter bulbs. When the plant is at its least active phase of growth – usually late summer and fall – these new offsets can be removed to start new plants.  Alternatively, a thick outer fleshy peel of the bulb scale can be cut from the mother bulb, this then cut into two or three sections if large enough and used to start new bulblets. Place these sections on the surface of moist potting soil and seal the container in a plastic bag. If all goes well small pea-sized bulblets should form in 3 to 4 months from these scale cuttings.

The plant I have observed for the past three years grows in our greenhouse collection and does not seem to have a true dormancy. It produces the most luxuriant growth during the cooler winter and early spring months (minimum greenhouse temperature about 60 degrees Fahrenheit) but stays green and fresh looking during the heat of summer too, slipping into a lack luster phase as the growing season ends.

This twining bulb makes an excellent pot plant for the patio and an interesting indoor specimen for the winter sunroom.  It must be provided a trellis at least two feet tall on which to climb.  If the stems die back or get too ratty looking they can be cut back and new ones forced to grow.

For easiest management keep the bulb confined to a six to eight inch pot and divide it every five years or so if needed to replenish the soil. Fertilize and water as with any houseplant. Though it hails from a desert region Bowiea is very tolerant of a range of watering practices provided the soil is well drained.