As those venerable sages of Americana, Earl Scruggs and Lester Flatt, said so many years ago, “Don’t get above your raisin.” Breaking out of the mold and embracing new things, especially new foods, is hard. Malibar Spinach or Climbing Spinach (Basella alba) is a green pot herb that is showing up regularly in our local farmers’ market, but I still find it hard to get above my raising. 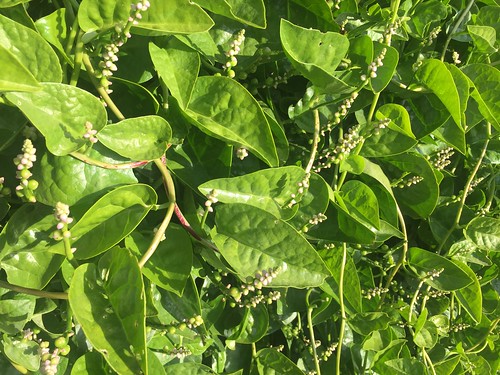 Malibar spinach is a member of the Basellaceae family which consists of five genera, three of which are native to Madagascar and one in southeastern Africa. Malibar spinach has long been cultivated in the tropics and most likely originated in Eastern India and Indonesia. It is now found growing in tropical regions throughout the world.

This is a fast growing, heat-loving, fleshy leafed vine with large 2-4-inch-long, heart-shaped leaves and twining vines that will grow 6-8 feet tall in a single growing season. Leaves are arranged alternately along the succulent stems that are either green or red in color. Though the name Basella rubra was used by Linnaeus when he gave it a Latin name, most authorities now treat the red-stemmed form as either a botanical form or as the cultivar “Rubra.”

Malibar spinach flowers are produced as solitary white or pinkish, one-eighth inch long blooms that never seem to open up on crowded axillary spikes that grow 4-8 inches long. Blooms appear in the fall and are attractive but not show-stoppers. Seeds are a pea-sized fleshy, red, single-seeded fruit that will not consistently mature in northern areas because of the lateness of flowering.

The first mention of Malibar (a coastal region of southwestern India) spinach in English is in 1691 but it wasn’t much grown as a vegetable garden plant until it was reported in French gardens in the 1820’s. I made its acquaintance after the Hmong families, displaced from their homeland by the Vietnam War, started buying poultry farms in northwest Arkansas. They have a strong tradition of gardening and soon became a significant part of our local farmer’s market scene. With them came crops new to me, including Malibar spinach.

As a leafy green it is rich in vitamins A and C and high in calcium. It has a semi-mucilaginous nature, making it ideal for thickening soups and for use in curries and stir-fries. It can also be eaten fresh in salads. The Internet tells us it tastes like spinach, but to me it has a somewhat earthy under taste. But, while the harvest season for spinach is during the cold months, Malibar spinach thrives in the heat of summer and just a few plants will keep the average family supplied with greens all summer long.

Malibar spinach can be grown on a trellis in the vegetable garden, as an ornamental vine for its bright, clean foliage or as a sprawling plant in the edible landscape. It can be started from seeds or cuttings but should not be planted out until the soil temperature is warmer than 60⁰F. If grown from seed, soak overnight in warm water before planting. Cuttings can be secured from stores that sell ethnic foods in the spring.

Plants should be grown in full sun in a good garden soil. They are frost intolerant and will die with the first hard freeze of fall. This vegetable is not bothered by insects so the foliage remains clear of blemishes during most of the season. The newest, youngest shoots are harvested for cooking as needed.