Given a choice between a fast, direct route from point A to point B, or a slower backroad, I almost always choose the slower route. On a recent excursion through the Ozarks, I saw the shining yellow flowers of yellow false foxglove (Aureolaria flava), flashing their showy faces my way as I drove along one of the branch canyons of the Mulberry River. 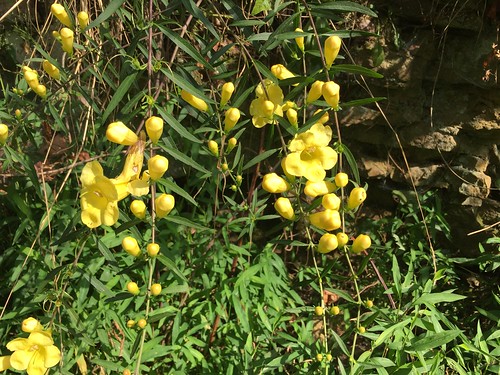 Yellow false foxglove is a three to four-foot-tall open, sprawling perennial growing in association with oaks. The eight recognized species of Aureolaria are native to the Eastern woodlands of North America and have long been considered members of the foxglove family but are now assigned to the closely related parasitic broomrape family.

This species is a hemiparasite, and obtains some of its nutrients from the roots of the white oaks it parasitizes, but has green leaves and also carries on photosynthesis. Though a weak parasite, it does no damage to the host oaks and may even help absorb some mineral nutrients for the tree. It shuns heavy shade, favoring open woodlands or disturbed areas along roadways. It ranges throughout the eastern woodlands as far north as Canada.

Leaves on the lower part of the plant are dissected like those of Vitex, but towards the ends of the branches become entire. Leaves are opposite on the stems with the willow-like leaves glabrous and to four inches long. Plants have a semi-woody character but die to the ground each winter.

Yellow false foxglove produces thumb sized yellow, five-lobed funnel shaped flowers at the ends of the branches during late summer and into the fall. Flowers are produced along an extending terminal spike and are produced over an extended period. They have an open throat and are pollinated primarily by bumble bees. The fruit is a pointed, two-sectioned capsule.

Though this is a lovely wildflower, I’ve never seen yellow false foxglove grown in a garden. Its parasitic ways make growing it a challenge. I read of one Missouri botanist claiming to have kept a transplanted plant alive after moving it to a study area, but such reports are rare. It is best enjoyed in the wild, though it might be interesting to scatter some seeds in a sunny site around a white oak to see if seedlings would establish.

For more information about horticulture or to see other Plant of the Week columns, visit extension's Web site, www.uaex.uada.edu, or contact your county extension agent. The Cooperative Extension Service is part of the U of A Division of Agriculture.