OK, I admit it. I like variegated plants - generally the gaudier the better. It seems to me that the more ornamental characteristics a plant has, the better.  It must be a character flaw because I use the same principle building omelets — the more stuff you add, the better. Gold dust plant (Aucuba japonica “Variegata”) is one of my favorite variegated shrubs.

The gold dust aucuba is a 6-foot-tall evergreen shrub with rich green, gold-spotted leaves that are 2 inches wide and 7 inches long.  While officially hardy only as far north as zone 7 in Arkansas, really sudden temperature drops (as we experienced in the mid-80's) can cause severe injury even there. Aucuba is native to Japan and China and was introduced to England in 1783 by John Graeffer. It was brought to the United States in the 1860's by Robert Hall, the same person who introduced Hall’s honeysuckle, which now runs rampant across the eastern U.S. woodlands.

Aucuba is a member of the dogwood family. It produces small, rather insignificant 4-petaled brownish blooms in the tops of the plant in the spring. Individual plants may be either male or female. The female plants, provided a male is around for pollination, produce clusters of bright red inch-long fruit in the fall and winter that look similar to our native dogwood, only larger. 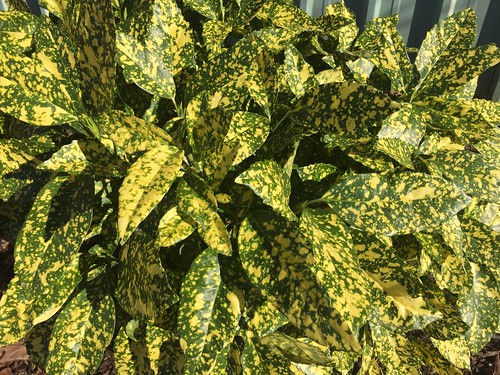 The golden variegation patterns are inherited from momma. If the female plant is variegated, the seedlings will be variegated regardless of what the male looks like.  If the female plant is green and papa is variegated, the seedlings will be green. This indicates that the cause of variegation is not under the control of the DNA of the nucleus, but probably under the control of the chloroplasts where photosynthesis occurs. Chloroplasts float in the juices of each cell and are inherited from the female parent.

Aucuba requires shade. While many of the plants we grow in the garden simply tolerate shade, gold dust aucuba must have it. If exposed to full sun, the leaves burn severely and turn a nice crunchy black. It maintains a nice compact form in the shade with its yellow variegated leaves glowing throughout the summer months when contrasted with the green backdrop of other shrubs and trees. In the winter the speckled gold leaves are bright additions to any landscape.

In the 1980’s, Aucuba was not seen in north Arkansas because our winters were just too cold. Since then, winters have gotten warmer and we now see it used on the south and west side of buildings where there is more wintertime warmth but it still must have shade in the summer. In warmer climes it is typically planted on the north and east side of buildings to assure it gets sufficient shade.

Aucubas should be planted in a reasonably fertile, well-drained soil that can be watered during dry weather.  They respond well to fertilization but fertilizer should not be used with reckless abandon as it can encourage soft growth and increase the chance of winter injury. If plants are overgrown, shear them back in the spring just before growth begins. The trimmings root easily — I’ve seen them root even in water.