Hands down, asparagus is my favorite vegetable. Once a springtime-only fresh vegetable, it is now found year-round in our produce aisles. While I have sympathy for the “eat local” movement, I’m glad to have this elegant vegetable available whenever I want the toothsome delight. 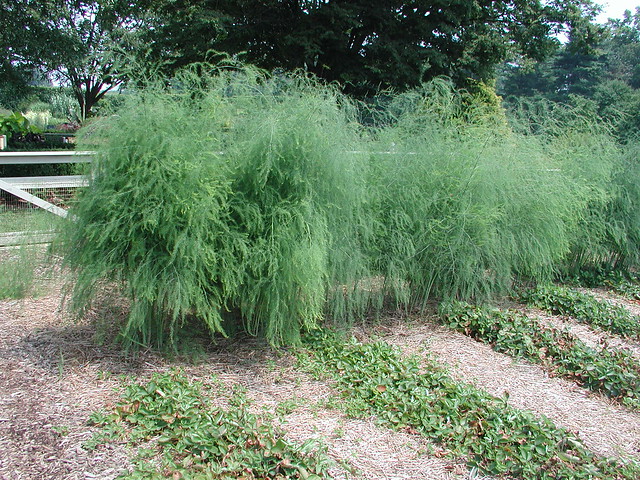 Asparagus (Asparagus officinalis) is a long-lived herbaceous perennial belonging to the newly formed asparagus family. It is one of 300 species of Old World plants that mostly grow as sprawling or climbing plants arising from an underground crown. Our edible asparagus, the only one of the genera, produces stout stems bearing a much-branched feathery top that grows 6 feet tall. Asparagus lacks true leaves; its photosynthesis is instead carried out in the green stems and needle-like branchlets known as cladophylls.

Seed grown asparagus plants are dioecious, producing either male or female plants. The nodding yellow-green flowers are about a quarter-inch across. Female plants produce pea sized red berries that birds relish and spread freely to areas where they can grow. Because male plants have little energy demand during procreation, they tend to produce more robust spears in the spring and are most often cultivated.

Asparagus has a long history of cultivation, probably dating back at least 2,500 years to the ancient Greeks. It is found growing wild throughout all of the milder parts of Europe, into northern Africa and as far east as Iran and much of China, but probably originated in the Mediterranean region.

The year-round availability of asparagus in our stores is a result of the federal government’s war on drugs. Back in 1991, and expanded in 2001, the Andean Trade Preference Act created a free-trade pact with several Andean countries, including Peru, with the goal of giving farmers something to produce besides cocaine. The North America Free Trading Act, the trading pact with Mexico and Canada, dates from the same time.

Asparagus is easy to grow in the vegetable garden, and clumps of it can be added to the back of the border to create a ferny backdrop for annuals and perennials. To prosper, asparagus should have a deep, well-drained soil and plenty of sunlight. If properly sited an asparagus planting can remain productive for 20-30 years. Crowns are planted in 2-foot-wide by 1-foot-deep trenches that help assure good root establishment. Once planted, the first spears should not be harvested for at least three years to assure good crown establishment. Harvesting is a daily affair, beginning in early spring and continuing until late spring.

For more information about horticulture, visit extension's Web site, www.uaex.uada.edu, or contact your county extension agent. The Cooperative Extension Service is part of the U of A Division of Agriculture.