Arisaema triphyllum Jack in the Pulpit
skip to main content

Plant of the Week: Arisaema triphyllum Jack in the Pulpit

Woodland wildflowers are dominated by spring blooming plants. These plants have adopted two strategies for survival in the dry, deeply shaded woods. The spring ephemerals do all of their growth in the short window between the end of winter and early May when the forest canopy is fully leafed out. The other strategy, characteristic of most perennial plants, relies on flowering in mid spring and then the ability to grow in the low light of the forest understory. Jack-in-the-pulpit (Arisaema triphyllum) is one of these. 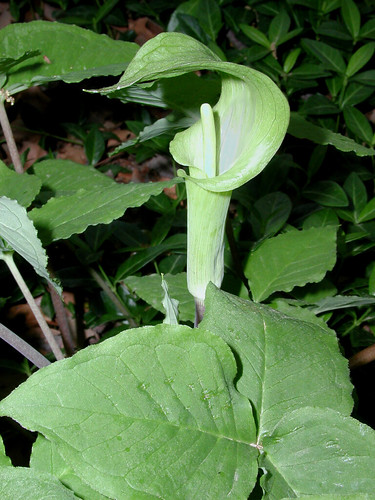 About 170 species of “jacks” are described with almost all species coming from southeastern Asia, except for the three that are native in North America. In the United States, just Jack-in-the-pulpit (Arisaema triphyllum) and green dragon (A. dracontium) are found. Both species are found in the eastern woodlands from Texas to eastern Canada, but Jack-in-the-pulpit is found in almost every county (except the swampy ones) while green dragon does not extend as far north into Canada.

Jack-in-the-pulpit is a perennial herb growing 1-2 feet tall from a starchy corm. In the spring flowers and leaves arise directly from the corm with the pedicel of the flower shorter than the petiole producing the three terminal leaflets. The elliptical, green leaflets range in size, depending on the size of the underground corm, from a couple inches long to 6 or more inches long. The central leaflet is the largest.

The flowering scape is typical for that of an aroid family member. The usually green, hooded, 4-6-inch-long leaflike spathe encircles the slender, cigarette shaped spadix which is crowded with tiny true flowers. The spathe of Jack-in-the-pulpit is usually green with lighter veins, often giving it a striped appearance. In some cases – especially in more northern areas – the spathe may be marron colored with white veinal markings. Across the wide range of distribution Jacks are quite variable and some authorities argue for recognizing three species but the new Flora of North America has decided to keep them as one species and recognize several forms based on plant ploidy level.

Technically Jack-in-the-pulpit is dioecious (flowers of both sexes on different parts of the same spadix), but in actuality it is a sex change artist. Young plants or plants growing in very dark areas produce small corms and have limited stored food reserves, so only pollen producing male flowers form. When the corm grows larger, plants stop producing male flowers and convert to female anatomy. When they reach a corm size about 4½ times as heavy as the average male corms, they will be large enough to produce the cluster of bright red berries that appear in late summer.

Jack-in-the-pulpit takes its name from an old English colloquialism where any random male was called “Jack.” Native Americans roasted the corms to make a starchy flour that was used in a kind of bread. Like most members of the aroid family, plants contain calcium oxalate crystals and can cause swelling and severe inflammation if eaten raw.

Jack-in-the-pulpit is easy to grow in any shaded, woodland site with high organic matter soil and sufficient moisture in the spring. In the woods it is often found on north facing slopes or even rocky ledges where soil has accumulated. It is a great companion plant for trilliums and assorted spring ephemerals. This native wildflower is in the nursery trade, usually sold as a packaged corm in the spring. They are easy to grow from seed but flowering will be delayed three to five years while the corms attain sufficient size to flower.  Once it starts flowering plants form a colony which can be lifted, divided and moved about the woodland garden. Pollination is by fungus gnats, so don’t expect butterflies to be flitting about the blooms.