I grew up in a garden.  My mother’s garden was not adorned with flowers and finery but instead rows of potatoes, corn, beans, cucumbers and the other produce she preserved to feed her family through the winter months. Dill (Anethum graveolens), a garden plant I seldom see anymore, was one of the plants she grew every year so she could make dill pickles. 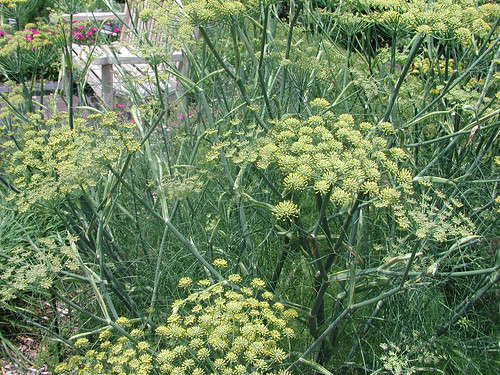 Dill, a monotypic annual or biennial, is a member of the carrot family. It originated in the Eastern Mediterranean region, but is now locally naturalized throughout much of the world. Hollow-stemmed plants grow erect to 3-4 feet tall with lacy blue-green, finely dissected pinnate leaves that are highly aromatic when crushed.

Dill has an ancient history of cultivation, with the first recorded instances appearing in Egypt 5,000 years ago. The name “dill” (old English “dyll”) probably derives from a Norse word for calming or soothing. In colonial America dill seeds were sometimes called “meetinghouse seeds” because chewing the seeds calmed fidgety children and soothed growling stomachs during long church services. In India and China, seeds have been used as part of traditional medicine.

In the kitchen dill has long been used as a garnish for soups and salads.  Dried dill weed loses most of its flavor so it is typically used only in the fresh state. Seeds, and more commonly seed heads, have been used as the flavoring ingredient for dill pickles. Commercial dill pickles use dill oil seed extract to impart the flavor.

Dill is most commonly grown in the garden as an annual, with seeds sown in place in the garden about the time of the last frost. Because of a long tap root plants transplant poorly so they are not seen in the bedding plant market. Dill should have full sun and a moist, fertile soil for best results.  They can also be grown in 12-inch pots as a container plant. Successive seeding at two- to four-week intervals will assure plants will remain in a vegetative state during the entire growing season to provide dill weed garnish.

Dill will reseed in the garden so flower heads can be picked off as soon as the flowers fade or in three to four weeks as the seeds reach maturity.

This easy-to-grow annual is attractive to a wide host of bees and butterflies in midsummer when it flowers. It is also a favorite food plant for caterpillars of the black swallowtail butterfly.