Plant of the Week: Anemone carolinana Carolina or Prairie Anemone

On the way to get the milk cows in for their morning milking, I noticed my first wildflower growing amongst the buffalo wallows in the winter-brown sod of our prairie home. I picked a handful of the blue and white flowers for my mother who dutifully put them in a pint jar vase on the windowsill. It was many years later that I learned these early spring beauties were the Carolina or Prairie Anemone, Anemone caroliniana. 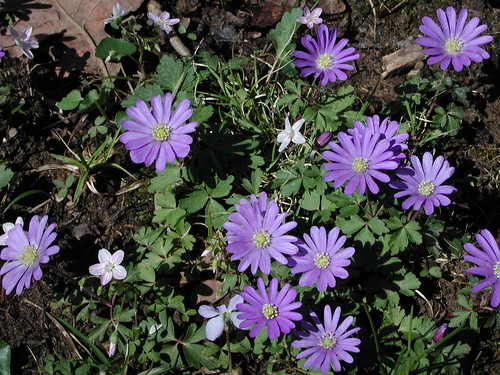 The 150 species of anemones known to science belong to the ranunculus family and are distributed throughout the world, indicating they have an ancient linage amongst the early angiosperms. Anemones are herbaceous perennials and have proven difficult for taxonomists to classify and clearly define. Recent molecular investigation indicates that some closely related genera such as the Hepatica (liverleaf) and Pulsatilla (windflower) should be combined with the anemones.

Prairie anemone is a small plant growing from an underground tuber with a rhizome near the top. It seldom exceeds 6-8 inches in height when in bloom. It has a basal whorl of usually trifoliate leaves that are each dissected into a series of sharply cut leaf segments. The flower stalks arise from the base of the plant and have a basal whorl of clasping 3-lobed bracts at the base of the stem.

Only one flower is produced per stem. Prairie anemone flowers are either white, pink, blue or violet and to an inch and a half across. In the wild the colonies will typically have a blend of several of these colors growing side by side. True petals are absent with the 10-20 linear sepals providing the show for the flower. A tight cluster of 50 or so yellow stamens are nested in the central whorl of the flowers. Blooms appear early, usually from mid-March into April.

Carolina anemone got its unfortunate species epitaph because it was first described in the 1768 Flora Caroliniana by Thomas Walter where he found the plant growing in South Carolina. I say this is an unfortunate name for the plant because if you look at the distribution of the species, it is only found in widely scattered spots in the eastern states. But, in middle America, prairie anemone forms a more or less continuous distribution throughout the tall grass prairies of the Great Plains. In Arkansas it is found most commonly in the western counties but also make an appearance in the Grand Prairie section of eastern Arkansas.

I have not been able to find prairie anemone offered in the nursery trade, with nurseries preferring showier and easier to grow species such as A. blanda and A. coronatia. Here in Fayetteville I see our native prairie anemone grown as a pass along plant with neighbors sharing divisions with neighbors. The several clumps I’ve watched for years, including my own, is suffering from the encroachment of trees. Though this is a plant of the open prairie, it will survive in the dry, open woods for a time, it does not want to be cut off completely from the sun.

Prairie anemone is best grown in a bright to sunny, spring wet, summer dry environment. In a prairie habitat it often is found in areas that are occasionally burned or that have been heavily grazed. I’ve had no success getting it established in an exposed rock garden with really sharp drainage but it has caught in a heavy mineral soil at the base of a deciduous magnolia. One neighbor, by meticulously hand picking competing grasses and weeds, has succeeded in establishing a beautiful planting of this dainty, early spring bloomer. Hers has spread slowly by reseeding but I still await my first seedlings.

For more information about horticulture or to see other Plant of the Week columns, visit Extension’s Website, www.uaex.edu, or contact your county extension agent. The Cooperative Extension Service is part of the U of A Division of Agriculture.