Plant of the Week: Amaryllis Bulbs

Being from a large family, selecting an affordable and appropriate gift for Christmas has become a drag. Fortunately, the plant world provides what I consider the perfect holiday gift. Amaryllis bulbs. Just add water and even those with the brownest thumbs can succeed. 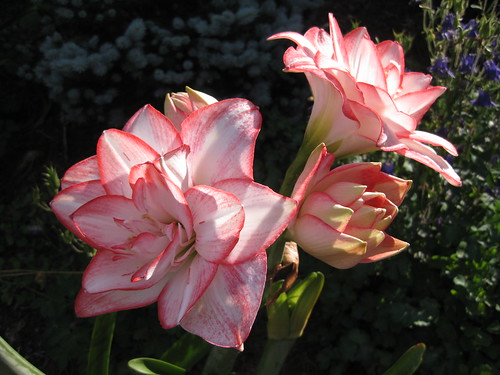 Amaryllis (Hippeastrum hybrids) is a genus of about 90 species of South American bulbs that have been highly hybridized over the past two hundred years to produce the sumptuous beauties we know today. Six species have been used to create the hybrids we see offered.

These are frost tender species that produce large tunic covered bulbs with a diameter up to 6 inches across. The most common bulb size sold will produce two stout scapes (hollow flower stems) about 24 inches tall bearing four to six blooms at the end of each stem. The largest bulbs may produce three flowering stems. The scapes may emerge simultaneously or push a week or two apart. Blooming usually happens 30-60 days after planting.

The enormous six-tepaled, fleshy, broadly funnel shaped amaryllis blooms are centered around orange-red colors but, depending on the cultivar and the whims of the breeder, drift off into pink, white, striped or variously blended hues or patterned markings. The flowers lack fragrance but have good lasting characteristics, with individual flowers remaining open a week or so before withering.

The usually four, 2-inch-wide and 24-inch-long leaves are deep, glossy green. Bulbs provided by Dutch growers tend to send up scapes before leaves emerge whereas bulbs produced in South Arica, Kenya and Israel tend to produce new leaves and scapes at the same time. Bulbs held over and rebloomed from previous years usually produce bloom scapes and leaves simultaneously.

Botanists have been arguing for 250 years about what to call these beautiful, winter flowering plants. Linnaeus originally used the name Amaryllis to describe a tropical bulb, but it was not clear where it came from. As additional look alike bulbs were added to the list, they were added under the name Amaryllis. Finally, the differences were recognized and the plants from Africa were retained in the Amaryllis genus while the South American species were assigned the new name Hippeastrum.

But, while the botanists argued, breeders went to work and began offering hybrids under the name Amaryllis in the early 19th century. So, the hybrids have always been called amaryllis, even though they came from South America. Botanists finally agreed to stop arguing in 1984 and accepted Hippeastrum as the correct Latin name for the South American species.

Forcing amaryllis bulbs to bloom is pretty simple. Pot them in a pot slightly larger than the bulb, but position the bulb so that the top third of the bulb is exposed. Because roots appear only from the base of the bulb, planting the bulb deeper in the soil deprives it of rooting opportunity. Once planted, give the bulb enough water to keep it moderately moist. Place it where it gets good light and receives room-temperature conditions. To make sure the scape grows tall and straight, rotate the pot every couple days if the light is coming predominately from one side.

When the plant is finished blooming, treat it as if it were a houseplant. Keep it watered and maybe fertilize it a few times until it can be moved outside during the summer. Give it bright light and keep it well watered and fertilized with a slow release fertilizer to encourage good vegetative growth during the summer. This will ensure good blooms during the coming winter. Rebloomed amaryllis bulbs seldom can be forced into flower for Christmas, but always come through with a good bloom display in late winter. With minimal care, bulbs can be rebloomed for years.

Amaryllis can be grown out of doors in areas where the bulbs will not freeze, which means they should overwinter in Arkansas gardens in Little Rock and points south. I have overwintered them in Fayetteville, but only once and then under a heavy mulch. The following year, the freeze got them even with the mulch.