Studying genealogy becomes more interesting and immediate as one reaches the age when, at any moment, you could become an ancestor. Plants, too, have ancestors and close relatives on all sides. Some are glamorous while others, not so much. Joseph’s Coat or Summer Poinsettia (Amaranthus tricolor) is a gaudy annual “flower” that shares many traits with common pigweed, one of its close kin. 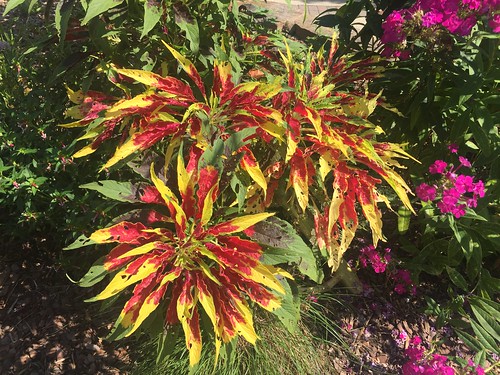 Joseph’s coat – a common name shared by several only distantly related annual plants with showy summertime foliage – is one of about 70 Amaranths that are widely distributed throughout the world. Many amaranths were used by Native Americans in pre-colonization times as a green vegetable while young (similar to spinach), as a grain crop for porridge or for various medicinal purposes.

This species, native to South America, is a fast, mostly erect-growing annual that tops out at three to four feet tall. In the cultivated forms plants produce green, often terminally-banded leaves at the base of the plant, but as the summer progresses the upper leaves turn vibrant shades of red, yellow and orange. The basal leaves are more broadly ovate to 8 inches long while the upper leaves are more slender with an elongated petiole. Molten Fire is a selection with all-red terminal leaves said to have been introduced by Luther Burbank in 1922.

Small reddish, bristly flower clusters are produced in the axils of the showy terminal leaves in the summer but are of no great ornamental value. A solitary black seed is produced in each spiny calyx but, as with their weedy kin, individual plants produce lots of seed.

These gaudy annuals are not commonly seen in refined gardens but are real standouts when encountered. Possibly it is their kinship with the pigweeds, about ten of which are common agricultural weeds in Arkansas, which diminishes their appeal. The name pigweed comes from the fact that the weedy amaranths grew in sites where pigs had been allowed to root around in the soil.

It turns out that the small seeds need light for germination. The rooting pigs brought the buried seeds to the surface and, if the pigs had been moved to a different pen, the fast-growing weeds quickly covered the old pigpen. Today pigweed is more of a problem with cotton and soybean farmers because some pigweeds, notably Palmers pigweed, have developed resistance to the herbicide glyphosate, thus neutralizing a commonly used weed control strategy.

Joseph’s coat with its show foliage is only one of several ornamental amaranths. Some, such as love-lies-bleeding (A. caudatus) and various red leafed forms with large, erect clusters of seed heads make bright, bold statements in the garden. Joseph’s coat does not seem to reseed in the garden but the large, bold forms will reseed freely but are easily edited out as they appear. Amaranth seeds are one of the species that go through the Botanical Garden of the Ozarks’ composting procedure unscathed so I try to eliminate the seed heads from the compost pile.

Joseph’s coat and other ornamental amaranths are better suited for larger, more informal gardens than small intimate spaces. Ornamental amaranths are warm seeded annuals that should not be planted out until the danger of frost is past. They need full sunlight and do best in a good garden soil. They tolerate dry conditions well but on poor, infertile soils they languish. An assortment of insects feed on the foliage, so it is not uncommon to see a few holes in the leaves.