Plant of the Week: Alyssum corymbosum

Of all classes of gardeners, serious rock gardeners are more attune to botanical Latin and what plant taxonomists are doing than any other garden group. Yet, for more than 150 years, they have stuck to a familiar old name – Alyssum in this case – and ignored the botanists who use the generic name Aurinia. One of my favorite plants in the Botanical Garden of the Ozarks rock garden is Aurinia corymbosa, but I grew it from seed labeled Alyssum corymobsum. 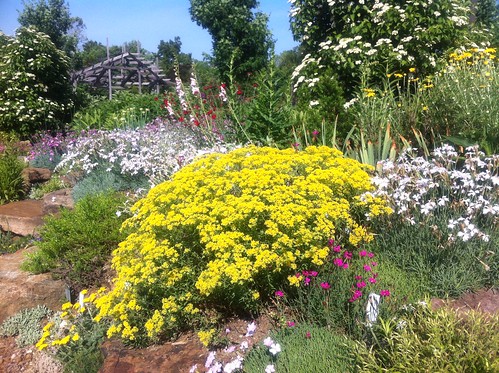 This alyssum pretender is a member of the mustard family and is native to the Balkan Peninsula of Southern Europe. The Aurinia genus consists of a dozen species, including the Basket of Gold Alyssum (Aurinia saxatilis) and is closely allied to the true Alyssums which also range across Southern Europe and comprise more than 120 species. The differences between the two groups are minor to the casual gardener but significant to botanists.

Like all of the perennial members of the Alyssums and Aurinia, this plant has a woody base and almost woody upper stems. It grows upright to about a foot tall and 18 inches wide. The foliage, obscured amongst the many flowering stems, is small and lance shaped on the branches but larger, often lobed and spatula shaped at the base of the plant.

The bright yellow flowers are produced in many-flowered corymbs in late spring (usually May), with plants remaining in bloom for almost four weeks as each of the tiny blooms gets its turn. Individual flowers are tiny, only about 4 mm across, with four notched petals. Seed, should it form, is in a tiny, almost round capsule like a tiny money plant.

Alyssum (translating as “not mad”) is a classic name first used by Dioscorides, the early Greek physician and botanist, who used the name to describe a plant used to treat people who had been bitten by rabid dogs. Aurinia has a clearer meaning and translates as “golden.”

The genus alyssum has been a catchall group over the centuries where botanists stuck all sorts of small, creeping 4-petaled flowers in the mustard family. Sweet alyssum, the popular annual bedding plant, used to be classified here as did the afore mentioned basket of gold alyssum.

Aurinia corymbosum is not commercially available but seeds kick around in the seed exchange lists of groups like the North American Rock Garden Society, where I got mine. The plant is hardy from zones 5-8 and seems to be long lived if well sited. I have mine growing in an alkaline patch of the rock garden with good wintertime drainage and full sun. In the spring before new growth begins, a top shearing will remove some of the dead stems left from winter and produce a more compact plant. In the six years I’ve grown it, I never encountered any reseeding.

For more information about horticulture or to see other Plant of the Week columns, visit Extension’s Website, www.uaex.uada.edu, or contact your county extension agent. The Cooperative Extension Service is part of the U of A System Division of Agriculture.