One of the most universal foods grown around the world is the onion, Allium cepa.  With such a long history of cultivation and selection from every quarter, it is not surprising that there is such a varied array of colors, shapes and flavors amongst this toothsome staple. 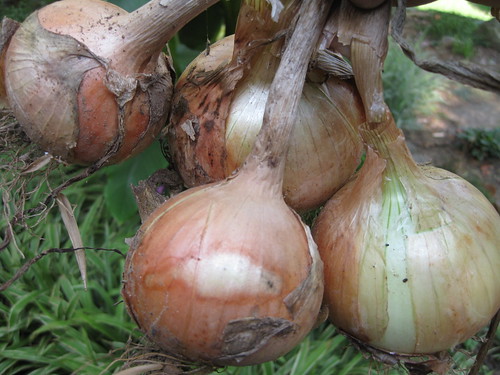 Onion is one of those plants known as a cultigen – a plant, such as wheat or coleus for examples – without a counterpart in the wild.  Over 700 species of alliums, now assigned to the amaryllis family, are known around the world.  The half dozen most closely related wild species with hollow leaves and characteristic oniony smell are widely scattered in the Middle East and Central Asia.  This tasty bulbous crop has been grown by mankind since the dawn of agriculture in the Fertile Crescent and seems to have radiated out from there during the past five thousand years.

Onions are biennial in nature, with bulb production during the first season and flowering during the spring of the second.  Gardeners of course short-circuit the natural order and harvest in the early summer of the first year when the tops begin to die.  Green onions, or scallions (a name taken from Ascalon, an old name for the modern-day city of Ashkelon in Israel) are seedlings only a few weeks old that are harvested before the bulb begins to swell.

Onion bulbs come in an assortment of sizes and shapes, including round or oval.  Shallots, or bunching onions, produce a series of small, mild bulbs instead of just one.  Colors vary greatly but generally are white, yellow or purple or some gradation between these three basic shades.  Taste too varies from sweet to bitter.  Growing conditions, including the amount of natural sulfur in the soil, influence the taste profile of the crop.

Are onions a main food for the table or a garnish?  During the building of the pyramids, a bean-counter of the day recorded that 1600 talents of silver were expended to feed the crew on a yummy diet of onions, radishes and garlic.  In the Middle Ages, European herbalists considered it more of a condiment, with leeks the preferred allium for eating.  Today few have eaten leeks but onions, while only rarely the main ingredient in a dish, have become a principle ingredient in in everything from stews to liver and onions.

Onions contain 89% water, 4% sugar, 2% fiber and 1% protein but they are loaded with assorted essential nutrients and sometimes strong flavoring compounds.  And they make you cry.  The tearing phenomena is a defense mechanism of the onion.  In a series of enzymatic changes in the cell, wounded tissue produces a volatile organosulfur compound (syn-Propanethial S-oxide) that triggers response in the eyes and causes tear production to dilute the irritant.  Some onions produce more of the compound than others.  Cutting onions under running water solves the problem.

Light sandy loam soil is best for growing onions.  Because onions are a cool weather crop, sets are best planted in early spring from early March through mid-April.  The basal plate (where the roots emerge) should be planted about an inch and one half deep with three inches between sets. Keep plants moist, but not wet, and assure that the nutrient status of the soil is on the high end, especially with regard to nitrogen.  Onions are usually ready to pull and air dry for storage in 80 to 90 days.