I love a good mystery. Spotting a chenille plant (Acalypha hispida) growing in a flowerbed on the Fayetteville Square, I decided I needed to know more about this old friend. But the Internet, while awash with generalities, didn’t give me the information I wanted. Where did it come from, and how did it end up in a flowerbed in Fayetteville? 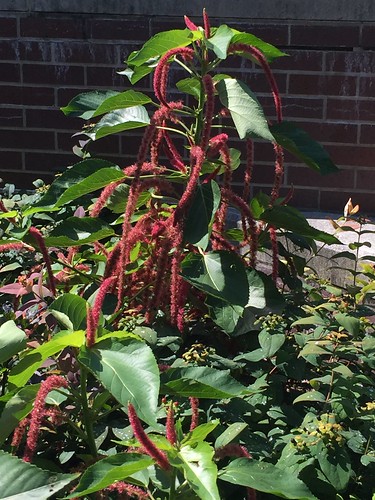 The Acalyphas, with over 450 species scattered around the tropics throughout the world, is the largest genus of the spurge family. They vary greatly in form but chenille plant, and the other common species grown as an ornamental, copperleaf (A. wilkesiana), are tender woody shrubs.

In frost free areas chenille plant grows to 12 feet tall and wide, but mostly we see it in pots under 3 feet tall or in flowerbeds where it may reach 5 feet before cold weather arrives. It has large (to 6 inches long), alternate, simple but serrate leaves. The name Acalypha used by Linnaeus was taken from the Greek name Hippocrates used to describe a nettle; the epitaph hispida translates from Latin as scratchy. The sap of Acalypha is clear, not milky as in many euphorbs.

Chenille plant is dioecious with either male or female plants. Only the female form is cultivated because male flowers are not very showy. The flowers consist of long drooping catkins growing from 6-18 inches long covered with short, scarlet fuzzy flowers. The catkins are produced from the leaf nodes and can appear at any season so long as it is warm enough, which means night temperatures need to be above 60⁰F. Because only females are grown, seeding does not occur.

From the internet we learn that chenille plant is native to the southwestern Pacific from New Guinea to Malesia. It was first described in N. L. Burman’s 1768 Flora Indica but seems to have been little grown outside of botanical gardens until the end of the 19th century. Then, at the 1898 Ghent Floralies flower show in Belgium, the gardening public was introduced to a newly discovered plant called A. sanderi, which L. H. Bailey described as “the leading novelty in 1899” in his Cyclopedia of American Horticulture published in 1910.

Several taxonomic websites list this “new plant” as being described in an 1896 edition of Gardeners’ Chronicle, but their citation is wrong. Using my old Bailey book and his cryptic references I was able to trace the plant, with a nice illustration, to the April 23, 1898 Gardeners’ Chronicle (page 248). There the author reports the plant was a Micholitz introduction.

Further sleuthing led me to Wilhelm Micholitz (1854 – 1923), an orchid collector who worked for Henry Sanders (1847 – 1920), the owner of London’s Sanders and Son Nursery that specialized in tropical plants. Micholitz collected in and around New Guinea from 1891-1898. According to the Gardeners’ Chronicle article, he found the especially colorful form of chenille plant we now grow on the Bismarck Archipelago, which is a volcanic arch of islands off the northeastern side of New Guinea.

Early on the plant was called “red hot cat tail” but the French name chenille plant soon won out. Chenille, the name of the fuzzy fabric, is a French name used to describe a fuzzy caterpillar.

Chenille plant is hardy in frost free areas where it is used as a year-round flowering shrub. In most areas it is sold as a spring or fall flowering pot plant that is not associated with any particular holiday. It is also well suited to the flowering border or large container plantings on the patio. It should have full sun, routine fertilization during the growing season to keep new growth coming, and normal watering frequency. It can be kept over as a houseplant but winter temperatures should be kept above 55⁰F and given a sunny position.