Who doesn’t love a good mystery? For 45 years, I’ve walked by a fir tree growing on the University of Arkansas campus in Fayetteville and wondered about the identity of this tree. Last week, touring the University of Pennsylvania’s Morris Arboretum in Philadelphia, I came across the answer. The tree is the Greek Fir, Abies cephalonica. 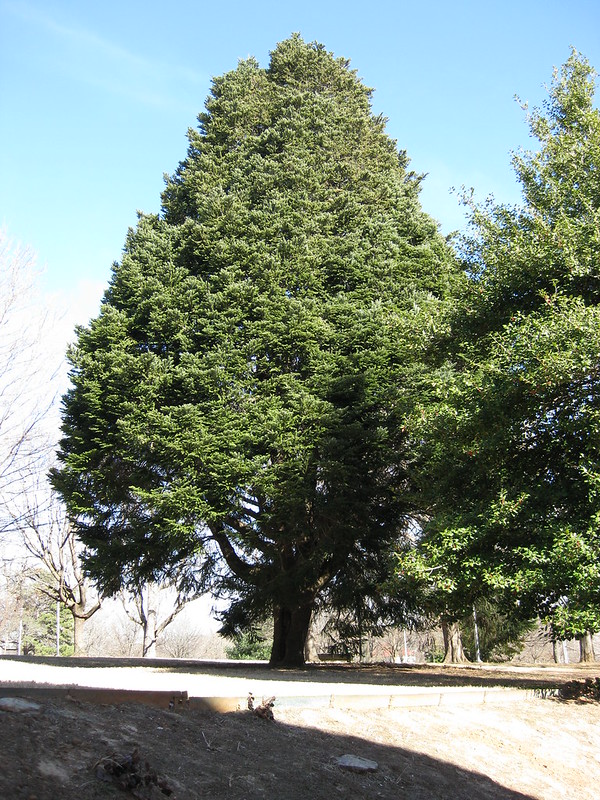 My slowness to identify the fir is excusable – at least to me – because firs just don’t grow well in the south, and I hardly ever encounter them in the wild, and certainly not in Greece. Over the years I’ve made half-hearted attempts to name the tree, but got nowhere. A record of where the tree came from might exist in the UofA archives, but I’ve never found it or talked to anyone on campus who knew about the tree.

Firs are members of the pine family. More than 50 species have been described with a uniform smattering of species found in mountain ranges of the northern hemisphere, including North America, Asia, Europe and Northern Africa. This widespread distribution pattern speaks to their ancient linage and the fact that they emerged as a species before the breakup of Laurasia, the northern supercontinent that split off from Pangea sometime around 150 million years ago.

The U of A tree is about 50 feet tall, very symmetrical and bearing attractive branches to near the ground. Its flattened evergreen needles are about an inch long with a thick, glossy, dark green upper surface with the lower surface marked with two prominent gray bands running the length of the needle. The erect, shattering as they mature, cones have been out of sight for me because they form at the top of the tree.

Other than the fact that this was the only fir on campus, what always attracted my attention about the tree was its toughness. It survived the extreme heat and droughts of 1980 and 2011-12, came through the extreme low temperatures of 1978 and 2011, the late season freeze of 2007, and the awful ice storm of 2009 without any noticeable scars. In fact, other than maybe being a bit larger, the tree seems almost unchanged since I first saw it all those years ago.

The origin of the tree is a mystery, but I can make an educated guess. In the 1970’s, there were actually two trees: the one on campus and a second one in the front yard of a home south of campus. This second tree was removed for a row of apartments that now occupy the site.

The USDA has had an on-again, off-again plant collecting program since the 1890’s, beginning with David Fairchild. Mostly they collected economic plants – those species that had potential in forestry, row crop agriculture or horticulture. One only has to look at soybean production to realize the economic significance of this small program over the years.

The Greek fir, originally identified from the Greek Island of Cephalonia, (38⁰N latitude) is found above 4,000 feet on the island and in adjacent areas of the Greece mainland. I have found no mention of a U.S. Department of Agriculture collection number, but it is the kind of plant location one would expect to find a plant collector. The tree at the Morris Arboretum was planted in 1932, probably about the same time the UofA tree was planted. The USDA shared collected seeds with Land Grant colleges, so it is likely someone on campus acquired a couple trees, taking one home and planting one on campus.

Firs like mountain ranges, not hot, dry sites. I planted a collection of a dozen firs at the Botanical Garden of the Ozarks in the spring of 2011, just before two years of crushing heat and drought. Only two trees survived, but maybe in 50 years, someone will wonder where these two interesting and out-of-place trees came from.