I’m a card-carrying member of the Azalea Society of America, so it’s pretty obvious I like azaleas. About twenty years ago the azalea world was shaken by the introduction of the first fall or repeat blooming azaleas, the Encore series. “Autumn Embers” Encore azalea, shown in the accompanying photo, gives an indication of the spring and fall display you can expect from these twice-blooming plants, at least here in north Arkansas. 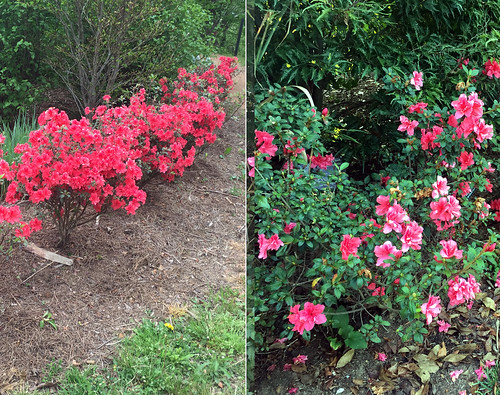 The repeat blooming azaleas have similar characteristics to the other ten thousand plus azalea cultivars named over the past 150 years. The fall bloomers come in an array of sizes and forms, with most plants in the four to five-foot-tall and wide size group. All are reliably evergreen, but some loose more leaves the further north you travel.

Bloom size for the fall blooming types is generally above two inches in size and ranges across the entire spectrum of colors found in azaleas. Both single and double cultivars are offered. Bloom time is also variable but most congregate in the mid to late season time during the spring with fall display scattered from late September through mid to even late November. It seems to me that fall blooming is a little more unpredictable than spring blooming, probably because of more variable fall weather patterns.

The Encore series was the first but today there are ten or so copy-cat series of repeat blooming azaleas being sold. They have changed azalea markets drastically because both nursery growers and retail nurserymen make more money selling the new, patented plants. This was not an unwelcome change because azaleas had fallen into a slump and had become a stale item in the nursery trade, often used as a spring loss-leader to bring customers into nurseries.

Buddy Lee, a plant breeder from Independence, LA, began working on the fall blooming azaleas in the early 1980’s and has released over 30 Encores to date. Having been developed on the hardiness border between zones 8 and 9, most repeat blooming clones do best in zone 7 and south.

Plants that set flower buds in the summer have a built in dormancy mechanism that prevents blooms from opening until spring when conditions are right for pollination. But, sometimes the dormancy that holds these blooms in check is tenuous. It is not unusual to see spring blooming shrubs – forsythia is a common example – that starts to flower in the fall after a prolonged period of rain that follows a sharp drought. The repeat blooming azaleas have a relatively weak hold on flower bud dormancy, and buds begin to open as temperatures cool and conditions become favorable for blooming. But there is a tradeoff. Because the azaleas only have so many flower buds, those that open in the fall will not be available for the spring display.

In north Arkansas at least, the fall blooming azaleas don’t flower all at once, but instead buds tend to open up over an extended period. In the spring, the repeat bloomers may be in bloom for the ten days of a typical azalea, but in the fall the display – though never as concentrated – may last for three or more weeks.

The fall blooming azaleas require the same conditions as spring blooming azaleas – namely a pH below 5.5, a well-drained organic growing medium and water during the growing season. Fall blooming azaleas do not perform as well in shady spots as typical azaleas, so site them where they get bright light to full sun during the early part of the day but some protection from the heat of the sun during the late afternoon. Shearing back and fertilizing the repeat bloomers in the spring just after blooms fade will encourage new growth and help assure the best flower bud set.