August in Arkansas is crape myrtle season. Over the past two decades, crape myrtles have more than doubled in sales and have become one of the new, trendy plants in the nursery industry. The new black-leafed crape myrtles, mostly selections of the common Lagerstroemia indica, are a new add-on feature that have helped drive the market for these old southern favorites. 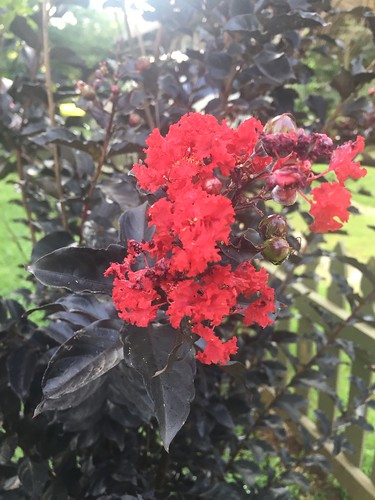 More than crape myrtle 450 cultivars have been selected, and they come in a wide array of shapes and sizes with flowers ranging from the old watermelon red, to true red, pink, lavender, purple and white.

The first serious breeding efforts for crape myrtles began in the 1980’s at the National Arboretum in Washington, D.C. when Donald Egolf started interspecific hybridizing efforts to add powdery mildew resistance to tree-form crape myrtles. Then, in the 1990’s, Dr. Carl Whitcomb began a crape myrtle breeding project near Stillwater, Oklahoma that resulted in a number of outstanding new medium sized clones.

In 2005, a crape myrtle seedling was selected at the Mississippi State horticultural research center in Poplarville which had burgundy, almost black leaves. It was from a batch of 3,200 irradiated seedlings that had been obtained by crossing Red Rocket™ crape myrtle (one of Whitcomb’s upright introductions) with a tree-form, white flowered Egolf hybrid called “Sarah’s Favorite.” The irradiation must have affected the DNA of the crape myrtle nucleus, and not the plastid color pigments which are transmitted through the female line.

All subsequent black-leafed crape myrtles seem to trace back to this 2005 selection, which can be used as either the seed or pollen parent. It was named “Chocolate Mocha” in its 2009 plant patent application (pp21540), filed by Patricia Knight and Wayne McLaurin with rights assigned to their employer, Mississippi State University. When this pink flowered crape myrtle was introduced to the nursery trade it had a name change, and became Delta Jazz™.  To date, there are seven siblings in the Delta series in the usual array of flower colors found in crape myrtles.

The origins of the Delta Jazz™ illustrates the serendipity sometimes involved with significant new plant discoveries. Between 2000-2004, Dr. Cecil Pounders worked for Mississippi State at their Poplarville Station as a plant breeder working with crape myrtle and daylilies. In the 2002 growing season, he made a number of crosses, collected seed and then irradiated the seed using equipment there on the station used to disinfect oysters and shrimp. In 2004 he switched jobs and went to the USDA-ARS, also housed on the same station, but turned his crape myrtle germplasm over to Dr. Knight. In the spring of 2005 Wayne McLaurin, who worked with Dr. Knight, spotted the small dark leafed plant growing in a pot in an area away from the other crape myrtle crosses and recognized it as something special. Later that summer with Hurricane Katrina bearing down on the Gulf Coast, they moved their still small black-leafed crape myrtle into one of the stronger buildings to make sure it survived the storm.

In 2007 Dr. Pounders began using Delta Jazz™ as a male parent in crosses. In 2013, five selections from this breeding program were jointly released by the USDA-ARS and the Mississippi State team as unpatented plants under the Ebony series name. The next season J. Berry Nursery in Texas picked up these plants and changed the name to the Black Diamond™ series. Meanwhile in 2013 in Georgia, Joshua Kardos with Plant Introductions, Inc., patented his own dark-leafed crape myrtles under the “Magic” series name, using Delta Jazz™ as the pollen parent. Midnight Magic™ is a red, more-compact version of Black Diamond Best Red™. At least two other series have been introduced since, with their own black-leafed clones.

Black Diamond Best Red is an upright growing plant that can reach 10-12 feet tall. My experience is that they are not as winter hardy as many crape myrtles, but if they get established in a sunny, somewhat protected spot they should be top hardy through zone 7, and root hardy through zone 6. When they attain some size, they will make good specimen plants or can be kept sheared for a dark-leafed deciduous hedge with colorful summertime flowers. Once established, crape myrtles have good drought and heat tolerance.