Over the years I’ve developed a fondness for tough plants. Diminutive, cute little things still interest me but I have less patience for pampering weaklings, so they seldom survive my Darwinian kind of maintenance. Cup plant (Silphium perfoliatum) is one the large, native, summer flowering rosinweeds that has earned a place in the little patch of pasture I am converting into a prairie. 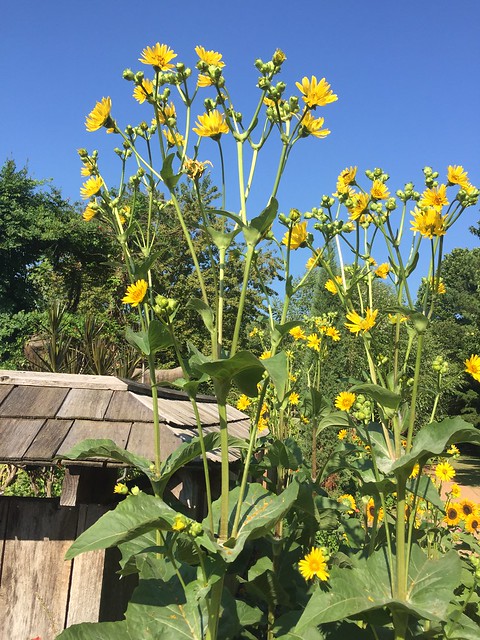 A dozen species of rosinweeds, all native to North America, are described with cup plant among the most widely distributed. Five species of rosinweeds are native to Arkansas. Cup plant is found throughout all the eastern and prairie states and several of the Canadian provinces. The rosinweed name makes reference to the thick, clear, viscous sap that exudes from the stem of most species when cut.

Cup plant is an 8-foot-tall fibrous-rooted, long lived perennial that forms a slowly expanding clump. The square stems are stout with opposite, coarsely toothed triangular leaves that fuse at their base, creating a small reservoir (cup) that holds water after each rain. The leaf pairs alternate as they move up the stem in what is called a decussate leaf arrangement pattern. Cup plant has a decidedly upright habit of growth and a coarse nature.

Yellow daisy-like flower heads two to three inches across are produced in open terminal panicles. Unopened, glabrous, round but lumpy flower buds have a distinctive look that is found in most species of Sisiphium. The 20 (or more) showy ray florets are about an inch long and surround a button-like cluster of yellow, turning to black-tipped, sterile disc florets. Flowers mature at different rates and bloom over an extended time from midsummer through early fall. The relatively large seeds (achenes) are only produced by the petal-like ray florets.

Cup plant and its kin are big plants that have a decidedly wild look about them. Though said to be grown in European gardens, cup plant is big and bold and would not fit comfortably into the average perennial border. It has never been “tamed” by cultivation by selecting clones that would work better in the average garden.

Silphiums have great garden characteristics of toughness, adaptation over a wide geographic range and they are native. But they are yellow flowered members of the daisy family that bloom in midsummer. Though I’m a sucker for yellow flowers, most female gardeners seem to hold the color with less high regard, and many have an unspoken prejudice against big, bold summer flowering members of the aster family. Perhaps too many of these plants have the name “weed” affixed to their common names. The summer blooming characteristic means plants are not producing flowers when they would be sold in the spring planting season.

But, the potential of reducing the height of the stem of cup plant or the length of the scape of compass plant (S. laciniatum) is intriguing. In my mind, they would still be native plants, but just more refined versions of their former self. The butterflies that visit them would be little perturbed by the more diminutive stature.

Cup plant grows in moist roadside ditches, in moist, open prairies and in moist but open forest glades. It is best used in the garden at the back of borders or at the edge of the woodlands. It is easily grown from seeds with flowering the first season.