I’m a movie fan who likes to sit through all the credits to see where things are filmed. As a plant nerd I look for distinctive plants and try to guess in advance where particular scene might have been shot. Tall, narrow growing conifers such as the Italian cypress used to be a giveaway for things filmed in the Mediterranean region or Southern California. But a look-alike plant, Taylor Juniper (Juniperus virginiana ‘Taylor’), is making these off-the-cuff guesses more difficult. 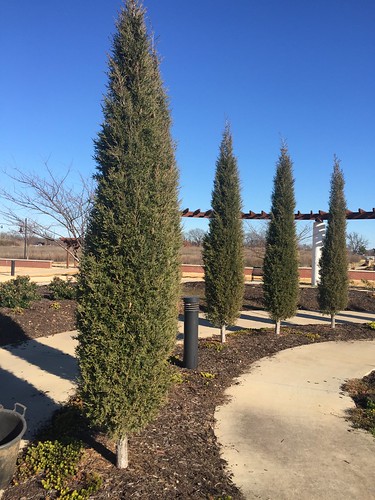 Approximately 75 species of Junipers are described, with all found in the northern hemisphere, equally divided between the New World and the Old. They are included in the cypress family, one of the few families of conifers that are actually expanding their range as the world heats up.

Juniperus virginiana, commonly known as eastern red cedar or just “cedar tree,” is distributed throughout the eastern half of the United States, where it quickly takes over pastureland or abandoned fields. The typical form is that of a broad spreading, upright growing evergreen capable of reaching 50 feet tall, with a height to spread ration of 2:1.

J.v. variety crebera is a columnar form of cedar that typically grows six to 10 times taller than it is wide. In Arkansas, significant stands of this naturally occurring columnar form can be seen along I-40 between Clarksville and Ft. Smith and in the Hot Springs area. “Taylor” is a selection of this columnar form with blueish-green foliage, tightly compact branching and a height to spread ration of 10:1. Though “Taylor” is said to reach 25 feet at maturity, it will probably grow taller given enough time.

Eastern red cedars may be either male or female plants. I have seen no evidence of berries on “Taylor” juniper so I assume it is a male clone, though its sex is not reported in the initial release information about the plant. In high elevation and arid sites, “Taylor” will develop more leaf wax so the plants will have a more blue or silvery cast.

“Taylor” juniper was discovered growing wild near in the central Nebraska town of Taylor in 1978. In 1992 the Nebraska Statewide Arboretum released it to the nursery trade. In 2003 it was selected as one of the arboretum’s “Great Plants for the Great Plains.”

Of the columnar junipers “Taylor” is one of the best because it has good uniformity and great foliar disease resistance. A similar shaped cultivar, J. scopulorum “Skyrocket” is a selection of the Western red cedar, but this cultivar is continually attacked by leaf blight fungi that give the plant a tattered appearance when grown in areas with high humidity.

Tall columnar plants such as “Taylor” juniper may be used as formal accents in the garden, for screen plantings where space is at a premium or even in large containers on the patio. It is hardy from zones 3-9. Plants should have full sun, good air circulation and a well-drained soil.  Like all Junipers, they should be inspected each May for the presence of bagworms.