LITTLE ROCK — Arkansans planning to exercise their voting rights during the upcoming November elections now have an invaluable education tool at their disposal: an online guide to Arkansas’ statewide ballot issues. 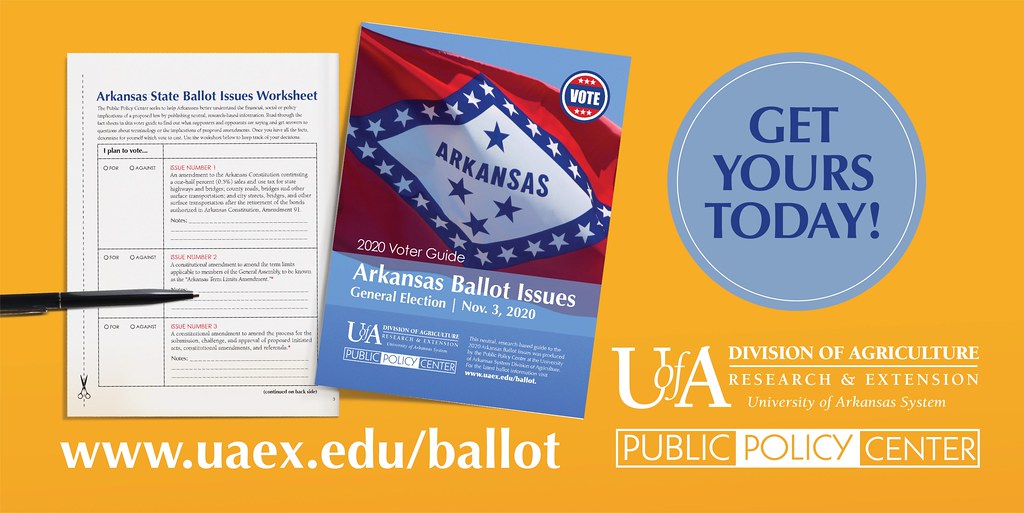 Kristin Higgins, a program associate with the Public Policy Center, said the center has published unbiased fact sheets on statewide ballot issues since 2004 in an effort to help voters better understand what is being asked of them.

“Arkansas voters have some decisions to make this fall when it comes to the state constitution,” Higgins said. “But in 2020 fashion, the status of several ballot issues remains uncertain.

“Various court challenges may impact what voters see on Election Day,” she said. “But we urge voters to research the issues so they are prepared either way.”

Higgins said the printed publication, which should be available at Cooperative Extension offices in counties throughout Arkansas no later than the first week of October, will cover six statewide ballot issues, although the Arkansas Supreme Court has recently ruled that three of the six do not qualify to be on the November ballot. Issue 1, Issue 2 and Issue 3 remain on the ballot.

The online guide has been updated to reflect those court decisions, Higgins said.

This year, proposals include five constitutional amendments and a referendum. These issues are:

Issue 1 is the only proposed constitutional amendment not being challenged in court. It was referred to voters by the General Assembly. Opponents are challenging the legislature’s Issue 2 and Issue 3 in Pulaski County Circuit Court over the wording of ballot titles.

All three citizen-initiated proposals – Issues 4, 5 and 6 – are also in court. The Arkansas Supreme Court recently ruled that those three issues did not qualify for the ballot because of problems with certifying canvasser background checks.

Arkansans see the popular name and ballot title of each proposed constitutional amendment when casting their votes. Every amendment actually includes more information than what is included on the ballot. Voters can find the full proposals and learn more about what they would do in the voter guide.

The voter guide is reviewed by University of Arkansas law school professors as well as issue supporters and opponents before publication.