FAYETTEVILLE, Ark. – Soybean breeders from southern public research institutions and agricultural industries, meeting at the Arkansas Agricultural Experiment Station headquarters this week, were focusing on a question that has taken a back seat in the past: What happens to soybeans after farmers grow them? 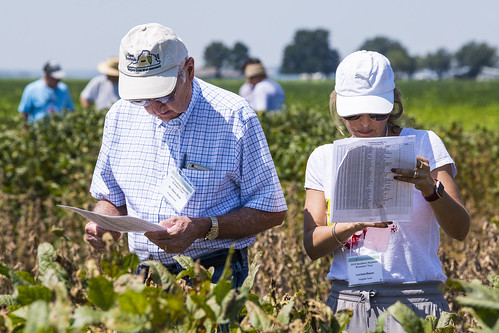 The annual Southern Soybean Breeders Tour meets each year at a different location, always hosted by one of the member public breeding programs. It was hosted this year by the University of Arkansas System Division of Agriculture at the Don Tyson Center for Agricultural Sciences at the Experiment Station’s Arkansas Agricultural Research and Extension Center.

The main purpose of the annual meeting is for breeders to exchange information and look for collaborative efforts, said Leandro Mozzoni, Division of Agriculture soybean breeder. But this year, attendees also discussed how soybeans are used by consumers and end-users, with an eye toward how breeding efforts might address their demands.

Traditionally, the most important considerations in soybean breeding have been such production needs as improved yields, disease and pest resistance, drought tolerance and bean quality, Mozzoni said.He said this meeting addressed issues of use and marketing that soybean breeders may want to consider in their ongoing efforts.

“How can we make soybeans more than just a commodity,” Mozzoni said, “and more like a branded product?”

Division of Agriculture soybean breeding efforts have investigated high-protein and niche market soybeans, and developed edamame soybean varieties that helped launch a new market for Arkansas River Valley growers. The institution’s efforts have even supported the startup of an edamame processing plant at Mulberry.

But Mozzoni said post-production marketing has never been the aim of most soybean breeding programs.

Breeding for the marketplace

Going forward, breeders may want to target quality traits tailored to specific markets. Mozzoni used the example of a cantaloupe that was bred with a unique flavor specifically for sale by Walmart.

“We spent a lot of time during the meeting looking at ways to bridge the gap between the needs of the farmer and the demands of consumers in a competitively grown crop,” Mozzoni said. “Can we make a unique soybean? And then, can we sell it?”

Michael Kidd, head of the Division of Agriculture’s poultry science department and a poultry nutrition researcher, described how soybeans are used in poultry feed and what the industry might look for in new varieties. Poultry feed is key to poultry production, he said, and accounts for nearly three-quarters of the industry’s production costs.

Soybeans are an important ingredient in poultry feed, Kidd said. “We use corn and other grains for energy,” he said, “and oil seeds — soybeans — for amino acid content.”

“Give us something we don’t have,” Kidd advised the attending soybean breeders. “Don’t give us more of what we already have.”

Tim Venverloh, vice president for sustainability strategy for the United Soybean Board, said he attended the tour to learn more about the research being done by southern soybean breeders, to connect names to faces and to connect more personally with the researchers.

Venverloh said the focus of this year’s meeting on marketplace demands fits with his efforts to breakdown research proposal categories into more specific areas, including end user needs.

“I look at the marketplace, block chain, transparency and traceability,” he said. “I’m interested in helping markets signal better to their consumers concerning what’s available and what we can do for them.”

Concerning breeding goals, Venverloh said it’s important to improve both the quality of soybeans and marketing of their potential for use as alternatives for everything from fuels to plastics. Soy films being developed by Division of Agriculture scientists and others promise safer, better and more environmentally sustainable uses, from seed coatings to food wraps and detergent “pods.”

“Soy is the miracle bean,” Venverloh said. “The potential for innovative products is huge, and we have to get the word out.”

Joyce Doyle, research coordinator for the Mid-South Soybean Board, said meetings like the Southern Soybean Breeders Tour are really about collaboration between breeders and researchers at public research institutions in the region.

“You’d be surprised how much these people work together,” she said.

The meeting gives her an opportunity to check on research projects Mid-South is supporting, Doyle said. “It gives me a chance to check in with the professors working on projects and to work with them on figuring out where to go next.

“Soybean growers look to us and to public breeding programs to develop traits that they need to grow a profitable crop,” Doyle said. “And that means helping them grow a quality product that meets consumer demands.”

Collaboration was on most of the attendees minds during the meeting. Lisa Fritz, a USDA Agricultural Research Service scientist, said it gives her a chance to see what her colleagues at other institutions are doing.

“I feel sometimes like I’m isolated,” Fritz said. “This helps me break out and connect with others in my field.”