(Newsrooms: SUBS lede, 3rd graf  to CORRECT reference to Gordon as a tropical storm instead of hurricane; DELETES extraneous copy)

FAYETTEVILLE, Ark. — Arkansas farmers accelerated harvest operations in the wake of excessive rains from the remnants of Tropical Storm Gordon, and those that are under way are making good crops. 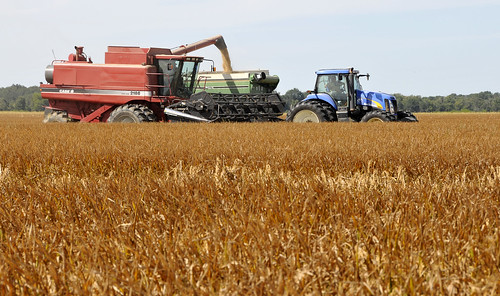 The Arkansas rice harvest is about 60 percent complete and seems to have survived the rains dropped by the remnants of Tropical Storm Gordon, said Jarrod Hardke, extension rice agronomist for the University of Arkansas System Division of Agriculture.

“Farmers are pushing hard to get the crop in ahead of any rain,” Hardke said.

“At the rate they’re going, the harvest could be about done within about three weeks,” Hardke said. “But if we get five or six days of rain next week, we may be looking at more delays.”

Most rice growing areas in the state missed the worst rain from Gordon, Hardke said, and suffered only light damage. “We had some rice leaning like it might fall over,” he said, “but by and large, it’s not as bad as was anticipated.”

Still, Hardke said, more rain delays increase the risks of harm to the harvest. “The longer rice is in the field, the more bad stuff might happen,” he said.

Cotton pickers are just getting rolling strong in the state, said Bill Roberston, extension cotton agronomist for the division. The target date for finishing the harvest is Nov. 1 and he expects many will hit it, if the weather lets them.

A lot of cotton farmers are just getting going, but the crop is looking good so far, Robertson said. “The weather we’re getting right now is ideal for the top crop,” he said.

“It looks like growers are getting 1,100 to 1,200 pounds per acre,” Robertson said. That’s in the ballpark with USDA’s NASS projection of 1,177 pounds per acre.

Robertson spoke with a farmer in Craighead County who reported getting about 1,600 pounds per acre in his first harvested field. “That’s more than three bales per acre,” Robertson said.

“More rain this week or next will be the last thing we need,” Robertson said. “But that’s farming in Arkansas.”

Soybean growers are just getting started with harvest, said Jeremy Ross, extension soybean agronomist. “Some growers are finishing up their rice and corn harvest and are just beginning to think about soybeans,” he said.

Some areas were hit hard by rains from Gordon and isolated areas saw considerable damage, Ross said. “Especially up in parts of Mississippi County, entire crops were lost because the beans were underwater.”

But overall in the state, Ross said weather-related soybean losses will likely be what he anticipated at 10 percent to 15 percent crop loss.

Weather permitting, Ross anticipates the soybean crop to be completed by the end of October. “It’s going to be a little later in the areas affected by Gordon,” he said.

NASS is projecting average soybean yields at 51 bushels per acre, but Ross thinks it will come in a little lower, probably in the upper 40s.

Hot dry weather dominated some soybean growing areas of the state, Ross said, and dry land soybeans in those places may be as low as around 20 bushels per acre.

Corn harvest in the state should be around 85 percent to 90 percent complete this week, said Jason Kelley, extension wheat and feed grains agronomist. Southern Arkansas corn should be nearly finished, Kelley said, and the northern counties a little behind.

“This week has been good weather for harvest and farmers got a lot done,” Kelley said.

NASS projects corn harvests at about 182 bushels per acre overall for Arkansas. “That’s not a record,” Kelley said, “but it’s good.”

“Farmers there tried planting early,” Kelley said. “Then they had a lot of rain and cold weather and they didn’t get the stands they needed. Getting a good stand is an early key to a good crop.”

When the weather dried out, it turned very hot and the high temperatures and drought conditions also had an impact in southern counties, Kelley said.

Northeast Arkansas will probably see the best crop, he said.

Arkansas corn fields didn’t see a lot of damage from Gordon, Kelley said. There was some lodging in isolated fields from heavy rain and high winds, but most corn acreage avoided the worst damage.

“We dodged a bullet there.”