FAYETTEVILLE, Ark. — Aphids love plants — can’t get enough of them. Nearly every agricultural plant crop and garden is a target for at least some of the more than 4,000 species of aphids that feed on their sap. 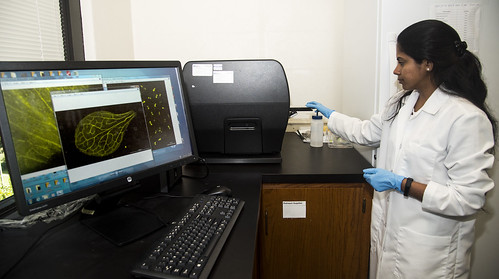 Fiona Goggin, professor of entomology for the University of Arkansas System Division of Agriculture and the U of A Dale Bumpers College of Agricultural, Food and Life Sciences, is on the case.

“Developing crop varieties with enhanced resistance to aphids is one of the most effective, economical and environmentally safe strategies to manage aphid crops pests,” Goggin said.

Plants, like most bodies, mount immune responses to attacks from diseases or insects, Goggin said. When an aphid begins feeding on a plant, it triggers a chemical signal to the plant’s cells that, in turn, triggers a response meant to dissuade the insect from continuing meal time.

“However,” Goggin said, “options for enhancing aphid resistance in crops are limited because we have relatively limited understanding of how plants defend themselves against aphids on the cellular, molecular and physiological levels.”

Goggin has received a $115,238 grant from the U of A Chancellor’s Innovation Fund to investigate those very functions.

Working with an interdisciplinary team of Division of Agriculture and University of Arkansas scientists, Goggin is researching the role of chloroplasts in plant defenses.

Chloroplasts are structures within plant cells that are specialized to carry out photosynthesis, Goggin said. They are also thought to play important roles in signaling and defense against plant pathogens. In plants, chloroplasts are the primary source of singlet oxygen, a chemically reactive molecule that can contribute to plant defensing signaling.

Singlet oxygen is a particular kind of reactive oxygen species, or ROS, that have strong reactions with other chemicals, Goggin said. A commonly known ROS is hydrogen peroxide. ROS have numerous commercial uses, including the manufacture of laundry detergent.

“ROS species can play a role in plant defenses,” Goggin said. “They can also whiten your shirt.”

In plants, singlet oxygen is a byproduct of photosynthesis. Goggin said normally it is fleeting and exists in small amounts, but production may be boosted by insect or disease stress.

Recent research at other institutions has shown that chloroplasts form projections, called stromules, in response to pathogens or other stresses. The stromules function as a bridge between the chloroplast and the nucleus of a cell. Stromules can transfer proteins and ROS to the nucleus.

Researchers posit that chloroplasts act as sensors to detect damage by pathogens and the stromules aid in transmitting signals to the nucleus that can modify gene expression and promote defenses against attackers.

Data from Goggin’s research suggests that chloroplasts also play a role in defense against aphids.

“The chemical signals in plant defenses are like the alarm system in your house,” Goggin said. “They are triggered when an insect or pathogen attacks and indicate the type and degree of attack.”

When the alarm system goes off, the plant can respond defensively, Goggin said.

Goggin is approaching this research with crop plants like soybean in mind, but at this point in a complex system, she is using a genetically simpler plant as a model — Arabidopsis thaliana. Also known as Mouse-ear cress, Arabidopsisis a common plant research model because its physiology and genetics are well known and documented.

In earlier research, Goggin’s lab identified a mutant genetic line of Arabidopsis thalianathat has enhanced aphid resistance. The resistance results from altered fatty acid profiles in the chloroplast membrane, and the observed activities of gene expression and singlet oxygen suggests they also play a role in greater resistance.

To understand how the system works, Goggin is breaking it down into discoverable chunks. She wants to see if aphid attacks stimulate the formation of stromules — those information bridges that connect a chloroplast to the nucleus.

And she wants to see if singlet oxygen accumulates in response to the aphids.

This is where her research partners join in. To help with detecting and counting stromules, Gauch will develop computer analysis methods that can analyze microscopy images to identify and count chloroplasts that have stromules.

Erf supervises a flow cytometry facility in the Division of Agriculture’s department of poultry science. The flow cytometer is a sensor that passes individual cells across an imager that can detect microscopic cellular structures. Based on fluorescent signals, Erf said, the flow cytometer can be used to detect changes in the chloroplasts after plants have been exposed to stresses like aphids.

Graduate assistants in Goggin’s lab will use photo microscopy to detect singlet oxygen response in the plants. This will require a fluorescent chemical, DanePy, that attaches to singlet oxygen, serving as a chemical probe detectable under a microscope.

Goggin and her graduate students are already using fluorescence and photo microscopy in their research. A computer-controlled cell imaging reader in her lab can detect chemical reactions to insect stress in an Arabidopsisplant modified to fluoresce at reaction sites.

The DanePy fluorescent probe will be able to narrow detection to singlet oxygen reactions.

The chemical is not commercially available, so McIntosh will supervise a graduate student, Jacklyn Kubik, who will synthesize it in his lab in the U of A department of chemistry and biochemistry.

Goggin’s research will bring a lot of tools, normally used in other fields of study, to bear on the investigation of plant defenses and plant-insect interactions.

This research is aimed at building a basis of knowledge that can help plant breeders develop crop plants with increased levels of resistance to aphids, Goggin said.

Many aphids can tolerate chemical pesticides, and because they typically feed on the underside of leaves, they can also reduce their exposure to pesticides that are sprayed from above

“Host plants that are resistant to aphids are the first and best line of defense against damage,” Goggin said. “A resistant crop is more efficient because it doesn’t require additional inputs and doesn’t rely on costly chemical control.”

Enhanced resistance could mean a plant reacts earlier and faster to aphid infestation, Goggin said. That would mean less damage done to the plant and less energy devoted to recovery.

“Once we understand how the reaction works and identify the genes that control it,” Goggin said, “we can then amplify the response to see if that decreases aphid infestations.”