FAYETTEVILLE, Ark. – See a house of monarchs. Cheer the longshots at the cockroach races. Take in a little entomological musical theater. There’s only one place to do all this: the 16th Arkansas Insect Festival on Oct. 11 at the Pauline Whitaker Animal Science Center.

The Department of Entomology at the University of Arkansas’s Fayetteville campus began the insect festival as a way to introduce students and others to see, touch and learn about insects and the study of entomology. The Arkansas Insect Festival typically draws about 3,000 students, teachers and others. 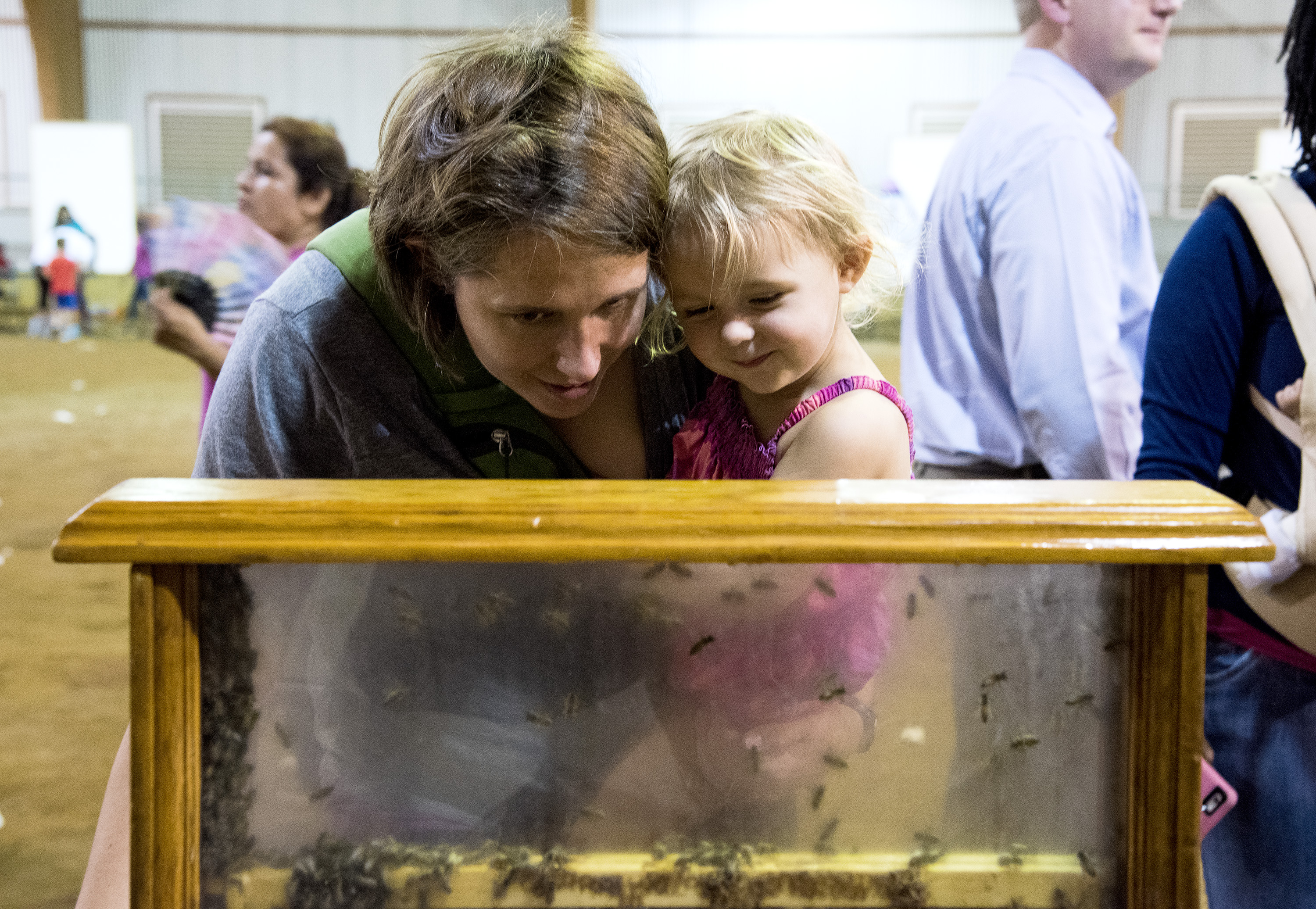 BEEing ENGAGED - Jamie Fralal and her daughter Mabel, 2, check out the bees. Some 100 volunteers helped the entomology department stage the annual Insect Fest, an event that began in 1993 (U of A System Division of Agriculture photo by Fred Miller).

“We have a zoo of living arthropods from tarantulas, to giant walking sticks, to giant cockroaches and all kinds of other insects,” said Donald Steinkraus, professor of Entomology for the Bumpers College of Agricultural, Food and Life Sciences, and the University of Arkansas System Division of Agriculture. “The visitors can hold some of these living arthropods as well as talk to the experts about them.

“We have a glassed-in small house full of live monarchs and other butterflies,” Steinkraus said. “We a have race track for cockroaches and visitors can cheer on their favorite cockroach as they run down the track. We’ll also have an insect musical theater where actors and musicians wear giant bug costumes and put on skits about insect life cycles and biology.”

In the 2016 festival, Hillary Fischer, a PhD student for the department of Entomology and Plant Pathology, was one of the lucky graduate students roped into dressing in an oversized costume and performing in the skits.

“I was a spider and I used Silly String to trap another grad student dressed as a fly in my web,” Fischer said. “It was a fun and silly way to teach the kids about biology and insect lifestyles.”

“We set up six tracks and have a Madagascar hissing cockroach in each lane and the students yell and pound on the table, trying to coach their favorite cockroach to win,” said Austin Jones, PhD student for the department. “It’s one of the more popular events. They all want to see the cockroaches race and scurry down the track.”

The festival is always a hit and never fails to highlight the beauty and importance of entomology.

“First, visitors will have a lot of fun.” Steinkraus said. “The cockroach races, the musical theater and crafts are very fun. Second, they will learn about insect diversity and the important role insects play in agriculture, nature and ecosystems. Third, they will find that many insects are beautiful. Fourth, they will be able to closely examine insects and touch living ones in the zoo as well as look at them through microscopes.”

“I hope visitors will leave with a greater appreciation of insects and their interactions with humans, plants birds, agriculture and health,” Steinkraus said. “In fact, we have been having the festival since 1993 and people come to me, now adults, and tell me they went to the festivals as children and have never forgotten them.”

For more information on the Insect Festival, visit https://entomology.uark.edu/services-and-outreach/insect-festival.php