FAYETTEVILLE, Ark. — Research published by a University of Arkansas System Division of Agriculture scientist has been recognized by an international publisher for its high-impact potential. 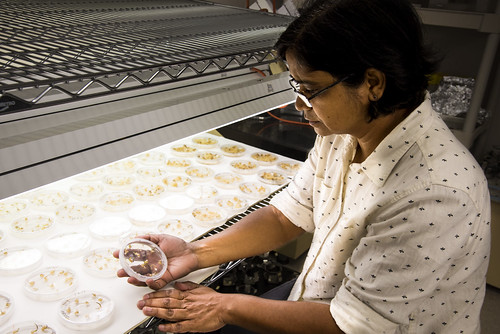 Vibha Srivastava, professor of crop, soil and environmental sciences for the Division of Agriculture, has been experimenting with gene editing, a technique that induces mutations in plants. Her goal is to develop technologies that will one day assist rice breeders develop advanced rice varieties for Arkansas growers.

These conditions include plant diseases that mutate to overcome resistance and insects that eventually adapt to defeat a plant’s natural defenses. Environmental changes can include climate changes that affect air temperature or water availability, or the invasion of new weeds or insects.

Conventional breeding requires scientists to cross many generations of plants in order to move useful mutations that occur in nature from wild cousins of rice into breeding lines that may lead to new cultivated rice varieties. The process can take decades to accomplish.

Gene editing can speed up the process, Srivastava said.

Srivastava emphasizes that gene editing is not the same as genetic modification, in which genetic code from one organism is inserted into another organism.

To accomplish this, Srivastava is adapting a technology called “CRISPR/Cas9.” CRISPR is scientific shorthand for “clustered regularly interspaced short palindromic repeats.” These are segments of DNA that contain short, repetitive base sequences.

Cas9 stands for CRISPR associated protein 9, a type of protein that can be guided by CRISPR to induce cuts or double-stranded breaks in DNA. Srivastava said the cut is repaired by the cell through an error-prone process that using mutations.

“There are two techniques for gene editing,” Srivastava said. “Point mutations attempt to induce a mutation in a single gene and defined deletions attempt to excise a larger chromosome section.”

Srivastava was attempting to delete a chromosome section by inducing cuts at two different points that mark the beginning and end of the section she wanted to remove.

Removing genetic code might seem an unlikely goal, but Srivastava said it has the potential to eliminate a yield- or quality-limiting plant characteristic. One such gene segment, she said, controls rice grain quality. When it is activated, by high nighttime temperatures, it causes a decline in quality.

Deleting that set of genetic instructions could help improve rice grain quality in the face of a common climate problem for Arkansas rice growers.

“What we found out,” Srivastava said, “is that creating deletions is extremely difficult.”

Srivastava had hoped that mutating the two points that defined the target gene section would result in the section being deleted. But what she found was that it simply mutated those two points and left the intervening section intact.

Research may not always take you where you expected, Srivastava said, but it advances knowledge that can help design a new experiment or even lead to unexpected discovery.

With accidental discovery in mind, Srivastava and research technician Shan Zhao are growing the gene edited plants in a greenhouse to maturity so they can evaluate whether any advantageous traits have been induced.

No gene edited plants leave the greenhouse or her lab, Srivastava said. Gene editing is still experimental and is not used in Division of Agriculture plant breeding programs.

Srivastava learned that colleagues in other research institutions were conducting similar experiments and encountering the same difficulties. “But no one was reporting it,” she said.

Some scientists may be reluctant to report when their experiments don’t succeed in accomplishing their intended goals. But Srivastava believes the knowledge gained is valuable, even if only to point ongoing research in new directions.

It is said that Thomas Edison said of repeated failures in his lab that he learned 1,000 ways not to make a lightbulb. The story may be apocryphal, but the point is valid in Srivastava’s view.

And Springer Nature, publisher of many peer-reviewed scientific journals, seems to agree. The publisher chose Srivastava’s research paper on her attempts to delete chromosome sections, to feature in their online “Change the World — One article at a time” section.

Springer Nature selects stand-out research articles from its research journals in various scientific disciplines. The high-impact papers are nominated by the publications’ editors’-in-chief and submitted to the publishers.

Srivastava’s article, titled “Dual-targeting by CRISPER/Cas9 for precise excision of transgenes from rice genome,” was originally published in Plant Cell Tissue and Organ Culture: Journal of Plant Biotechnology.The journal’s editor-in-chief nominated it for inclusion in “Change the World.”

This recognition gives Srivastava’s research article free access, making it available to a wider audience of researchers, including those who may be trying to blaze a similar trail in plant biotechnology.Media Contact: Mary Hightower