By Ryan McGeeney
U of A System Division of Agriculture
Sept. 20, 2017

(412 words)
(Download this story in MS Word here.)
(See more pictures of the variable oakleaf caterpillar in action at https://flic.kr/s/aHsm9f1sUZ.)

LITTLE ROCK – As scourges go, the return of the variable oakleaf caterpillar is pretty mild. But they do have a way of getting your attention. 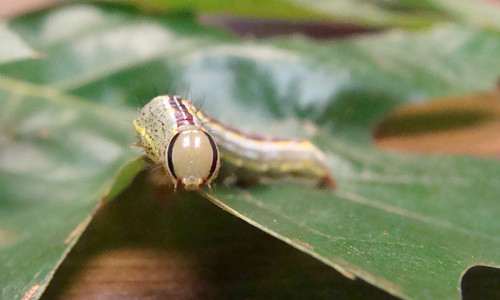 “I’ve probably received 40 calls in the last two days,” Garland County agricultural agent Allen Bates said Wednesday. “The caterpillars are infesting a lot of oak trees, here in Hot Springs — the county courthouse called me up there this morning.”

The variable oak leaf caterpillar — so called because its color can vary widely from one insect to the next — is now embarked on its annual feeding frenzy throughout much of the Southern Plains, gnawing its way through oak leaves, and depositing its droppings on sidewalks, porches and vehicles below. When the caterpillar is in sufficient concentrations, the sound of this process can sometimes be mistaken for rainfall.

Tamara Walkingstick, Associate Professor of Forest Resources at the University of Arkansas System Division of Agriculture and Associate Center Director of the Arkansas Forest Resources Center, said the caterpillars — a native insect to the region — typically surge when trees are already going dormant for the year, and are an important link in the ecological chain.

The caterpillar’s other natural predators include parasites, ground beetles and stinkbugs.

While the caterpillar’s droppings may stain surfaces below, they pose no apparent health risks to humans or pets. Walkingstick said that spraying insecticide on affected trees was both unnecessary and logistically impractical, given the height of many oaks.

Within a few weeks, the last of the insects will have fallen from the trees to the ground, where they naturally overwinter under the leaf litter, offering concerned citizens a chance to exert a modicum of control.

“It’s a good opportunity to reduce the local insect population by sweeping up the leaves and disposing of them,” Walkingstick said.