NEWPORT, Ark. — The tropical depression that was Hurricane Harvey left its footprints on Arkansas, flattening acres of harvest-ready rice, corn and soybeans, and perhaps setting the stage for a mosquito boom. 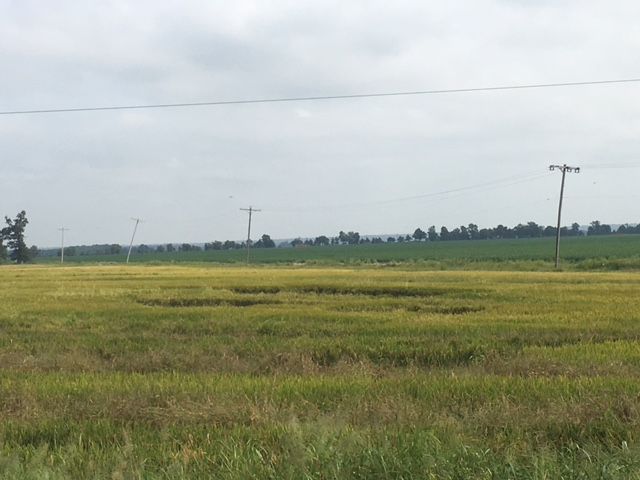 RICE -- Rice field in Poinsett Co., Arkansas, showing "potholes" where Harvey's wind and rain pushed down stalks. "A few corners of rice fields are starting to lodge, and some of the more rank beans are beginning to lodge as well. The lower ends of the bean fields that don't drain quickly will be partially lost and it will be worse where levees were just pulled and irrigation started this week. Harvest will obviously be delayed in much of the rice and corn, where combines were really cranking up this week," said Poinsett County Extension Agent Justin Chlapecka. (U of A System Division of Agriculture photo by Justin Chlapecka).

Jason McGee, a crop consultant and farmer in Cross County, said in looking at the forecasts before Harvey’s arrival, “we went to bed that night expecting a half-inch of rain and ended up with the most rainfall – 11 inches. That’s a lot of water and it’s going to be here for longer than we need it to be.”

Southern Poinsett and northern Cross County “caught most of it and they didn’t need to,” he said. “It’s pretty tough for a lot of people here. We’re already on thin margins and already got a lot of money spent on this crop.”

McGee and others were particularly worried about soybeans.

Jeremy Ross, extension soybean agronomist for the Division of Agriculture said that most of Arkansas’ soybeans are either in the filling pod or maturing stage, which means they have the maximum number of leaves and pods. With Harvey’s arrival, his phone has been blowing up with calls about lodging – where wind and rain cause the plants to lean or fall flat to the ground – and flooding.

“There is a tremendous amount of weight and surface area supported by the soybean stem,” he said. “ With the exceptional weather conditions we have had so far this year, many of the soybean plants in our fields are taller than normal. With the combination of a heavy soybean canopy along with tall plants, any significant wind can cause lodging of the plants.”

“In the last two days those calls and text messages about lodged soybean plants have increased,” Ross said. “Depending on the severity of the lodging, some plants will regain their upright posture, but many will continue to lean at some negative angle from erect.”

He said that with lodged plants, “seed sprouting and pod decay is increased due to excessive moisture within the canopy due to restricted air movement.

“Also, insecticides and fungicides are less effective in lodged field because they will not penetrate as deep into the crop canopy as they would with standing plants,” Ross said.

Then there’s the flooding.

“Ideally, if fields are only flooded for 12-24 hours, no significant yield loss should occur as long as the soybean plants are not flattened with the receding water,” he said. With more than 24 hours and depending on the water depth, growers could see “significant yield losses due to seed sprouting and pod and seed rot.”

Davis said that harvest-ready crops will have to wait in his county, he said. “So far biggest impact looks like delayed draining. There isn't anywhere for field water to go because ditches are full.”

There are “going to be a lot of mudded fields when they go back to cutting because the heavier soil won't be dry enough when the fields get ready to cut again,” ‘he said.

In some areas, roads were closed by water.

“We have several county roads that are flooded in areas, with one report of a washout passable only by tractor,” said Rick Wimberley, Cross County extension staff chair for the Division of Agriculture. “About a quarter mile of state highway 364 is under water west of Brushy Creek. Thankfully it is not a heavily traveled corridor.”

Since harvesters are built to catch plants that are standing upright, crops at the wrong angle or flattened will be missed.

Photos taken by extension agents through the Arkansas Delta on Thursday and Friday showed many acres of flattened rice, though in many cases it was in field corners where seeding and fertilizing runs tend to overlap from different directions. Robert Goodson, Phillips County extension agent for the Division of Agriculture, estimated 1,000-2,000 acres of mature rice were knocked over near Marvell. He also said there was some lint loss in cotton in his county and in some cases, wind on the heavy bolls caused the plants to twist. That, Goodson said, could slow harvest.

Bill Robertson, extension cotton agronomist for the Division of Agriculture, said Harvey would be tougher on early cotton. As a whole, “we just need sunshine,” he said.

Jason Kelley, extension wheat and feed grains agronomist for the Division of Agriculture said that “this was not what corn farmers needed. We were making good progress on harvest before Harvey arrived.

“An estimated 50 percent of the state’s corn has been harvested and yields have been above early-season expectations,” he said. “The biggest issue we will face now is lodged corn from the winds and rain. Most of the corn has been ready to harvest for some time, but previous rains delayed harvest.

“The longer corn stands in the field waiting on harvest, the greater the chance of lodging.  We were already seeing some lodging issues before Harvey, so assessment is still ongoing, but some areas will likely see significant lodging,” he said.

Grain sorghum is in the same boat, he said, with about half or more being harvested. He expected some lodging in sorghum, but also sprouting grain, thanks to the rain and warm temperatures.

“This weather will also delay planting of strawberries and may pose issue for the pumpkins we have planted in the county. A lot of water standing in beds where large pumpkins are sitting can lead to some damage or rot if it doesn't soak down,” Davis said. “We also already have had disease issues this year, especially downy and powdery mildew.”

The 2.5 inches that fell in Calhoun County was just right for fall gardens since it fell over 48 hours and wasn’t a torrential downpour, said Jaret Rushing, county extension staff chair.

“Folks were smart enough not to cut and lay hay out to dry, so it’s just a matter of letting the ground dry a little,” he said.

The rain might also produce a bumper crop of buzzing bloodsuckers, he said.

“What we have to be wary of now is the mosquito boom,” Rushing said. “Populations were already starting to replenish and with this stagnant water, deer hunters will not be all too pleased in three weeks when the season opens.”