By Tracy Courage
U of A System Division of Agriculture

LITTLE ROCK — Arkansas 4-H members showed up Oct. 12 at the Arkansas State Fair ready to collect prizes for the fruits of their labors - specifically their pumpkins and watermelons. 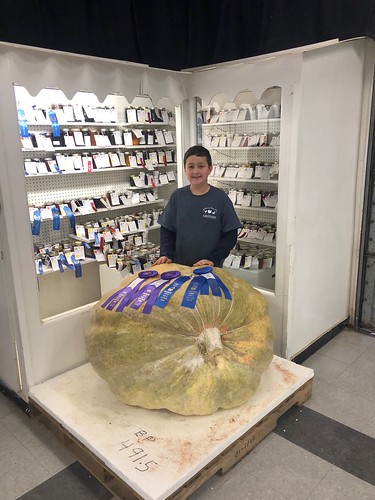 Ten-year-old Buster Passmore from Greene County won the giant pumpkin contest by a landslide, delivering a 491.5-pound Atlantic Giant pumpkin. Buster and his dad, Mark, used a tractor and a system of straps to load the pumpkin onto a pallet and into their pick-up truck. Once at the fair, a forklift was used to unload it, and six men hoisted the pumpkin off the pallet.

The pumpkin then presented a new problem for judges, whose scale maxed out at 400 lbs.

Clay Wingfield, program technician at the Southwest Research and Extension Center in Hope, chairs the annual Giant Pumpkin and Watermelon Contest and said he could not recall a pumpkin bigger than Buster’s in recent years.

“It’s the biggest one I’ve ever grown,” said Buster, who has a Facebook page “Buster’s Garden” with more than 3,700 followers. Asked for his secret to growing big pumpkins, Buster said, “I do have a green thumb. And the other secret … well, it’s a secret.”

Colby Daniell, a Clark County 4-H member, won the giant watermelon contest for the third time with a 145-pound melon. This year’s top 10 watermelon weights ranged from 25 to 145 pounds.

Owen Staton, 12, of Logan County, brought a 46-pound melon to the fair last year but returned with an 82-pounder this year, placing third. He planted his seeds June 15 and picked the melon the day before the fair, allowing it maximum time to grow.

The competitions were open to the top five winners in each county in the state, and the pumpkins and watermelons had to be grown by kids aged nine to 19 years old.

The top 10 winners in each contest are as follows: