By Ryan McGeeney
U of A System Division of Agriculture
Oct. 26, 2018

(Newsrooms: with PHOTOS and VIDEO at https://www.flickr.com/gp/uacescomm/15cg8n)

FAYETTEVILLE, Ark. – An outbreak of southern buffalo gnats in late March and early April caused the deaths of nearly 100 domesticated animals and at least 280 deer in Arkansas County, University of Arkansas System Division of Agriculture researchers said this week. 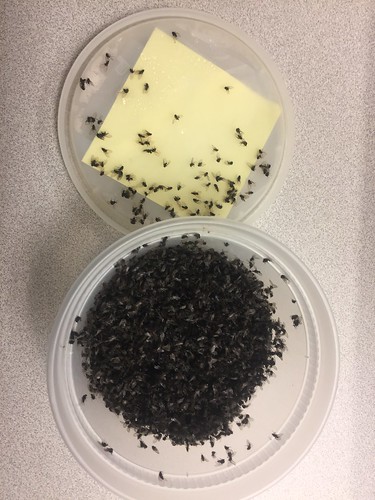 Kelly Loftin, extension entomologist for the Division of Agriculture, said spring flooding in the White River contributed to especially large populations of the southern buffalo gnat, which is actually a type of black fly.

“These flies breed in running water,” Loftin said. “You tend to have bigger populations when you’ve got flooding, and other conditions are right. Around the White River, those conditions and flooding coincide around Easter. Traditionally, that’s when you’re going to have big populations.”

In mid-April, Loftin and several Cooperative Extension Service agents asked producers in affected areas to report losses they believed to be connected to the outbreak. In Arkansas County, residents reported the deaths of three bulls, 30 cows, 30 calves, 27 horses, several mules and a dog, Loftin said.

Reports from hunters and wildlife officials put the estimated number of deaths in deer at about 280.

“There can be death due to blood loss — exsanguination,” he said. “There can be death from a large number of flies blocking the air passageway — essentially, suffocation. But if you look at a lot of the literature, it suggests that most of the deaths will be due to toxemia. Basically, the animal reacting to the saliva, the anticoagulants in the salivary glands of the gnats.

“When you have massive attacks from the southern buffalo gnat, the deaths are likely caused by acute toxemia or anaphylactic shock,” Loftin said. “It’s not a pathogen — it’s just the toxins in the salivary glands.”

Miller County residents also reported seeing a few flies earlier this year but the population was not at treatment level and no livestock losses occurred.

“In southwest Arkansas, it tends to happen in late January through early March, and that has to do with the water sources,” Loftin said. “In Texarkana, there’s a lake that’s used as the water supply for Dallas. At certain times, they have to release a lot of water from that lake through the bottom of the dam, and that makes it pretty suitable for southern buffalo gnats —it’s not a very deep lake, so during that time, the conditions are about right. The flies like cooler water and these cooler water conditions allow for an extended breeding season.”

Loftin said the most effective abatement approach now in use is the application of Bacillus thuringiensisvar. israelensis, commonly referred to simply as Bti. Bti is a naturally-occurring bacterium in soil, commonly used for repressing populations of mosquito larvae and other nuisance insects.

“One challenge is that you don’t just go out and spread around the Bti willy-nilly,” Loftin said. “A lot of background has to be done.

“Periodically throughout the season, you’re going to have black flies emerging,” he said. “So you’ve got to go out in the river, and look at limbs and artificial substrates that are in that flowing water, and estimate the black fly population. If you let them (the larvae) go too long, and they become black fly pupae, you won’t kill them with Bti. These pupae will become blood-feeding adults.”

“It’s critical to get your timing just perfect. There’s a lot of study and calculation that goes into deciding when to treat,” Loftin said.

Although there have likely been multiple other outbreaks of the southern buffalo gnat throughout the state’s history, Loftin said the only other documented outbreak in Arkansas County occurred in 1934, when more than 1,000 mules — a significantly more common farm animal at the time — were killed off by an outbreak of southern buffalo gnats.