By Emily Thompson
U of A System Division of Agriculture
Oct. 23, 2018

LITTLE ROCK— Arkansas has 1.7 million voters, but there is often a low turnout on Election Day. In fact, for the vast majority of counties in the state, voter turnout tends to be less than 55 percent, according to data published Tuesday by the Washington Post. 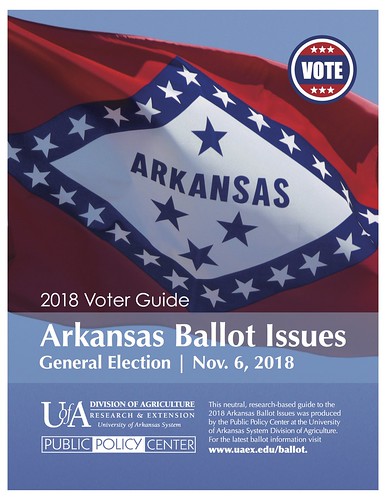 “Thousands of more people vote for governor, but then don't vote at all on the statewide ballot issues, which often include policies that affect every person in the state,” Higgins said. “Voting on constitutional amendments or initiated acts are where Arkansans have a real impact on shaping the state and how we do things here.”

The Division of Agriculture Public Policy Center has produced a neutral voter guide on all the statewide ballot issues, available online at http://bit.ly/2JemOsf, or in print at your local county extension office. The center has also made short videos for each ballot issue, available on the Division of Agriculture YouTube channel at https://www.youtube.com/user/ARextension, so that all Arkansans can become informed voters.

The Arkansas Supreme Court has disqualified Issue 1 and Issue 3.

The Public Policy Center exists to provide Arkansans with research-based information and education about public issues that are pressing, emerging, involve multiple points of view and have widespread consequences.