U of A weed science team wins southern region competition 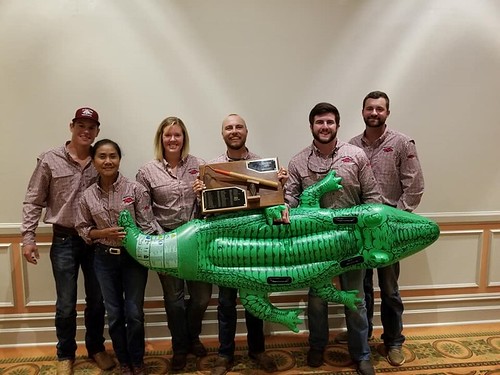 Competitors rotated to different stations where various weed science-related scenarios were set up. From herbicide symptomology and calibration to weed identification and recommendations, students were challenged, tested and scored.

To provide a diversion from their chosen discipline, this year’s contest included a "mystery event,” in which a flat-bed gooseneck trailer was set up with various flaws, including items such as a cargo load not being properly secured for transport. Students were expected to identify faults making it illegal for the trailer to travel.

The team is composed of students from the Dale Bumpers College of Agricultural, Food and Life Science's Department of Crop, Soil, and Environmental Sciences, part of the Division of Agriculture. Team members are Wyatt Coffman, Zachary Lancaster, Lawson Priess, Jacob Richburg and Hannah Wright. Coaches included Nilda Burgos and Jason Norsworthy, both of whom are professors of Crop, Soil and Environmental Science with appointments within the Division of Agriculture.

In individual competition and scoring, U of A team captain Lancaster finished first overall, and was the top individual in weed identification and calibration. Wright was fourth overall and first in the farmer problem category. Coffman was third overall, Priess fifth and Richburg eighth.

In addition, the Arkansas team earned the Green Alligator Award for recording a perfect score in the team sprayer calibration event. The challenge involved calibrating a fluoridone application in a pond to control aquatic weeds.