By Emily Thompson
U of A System Division of Agriculture
Oct. 12, 2018 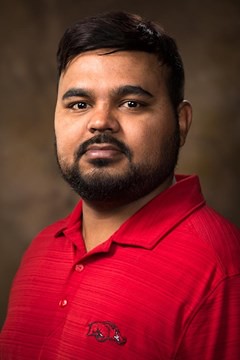 “Drought causes tremendous variability in soybean yield from year to year,” said Avjinder Kaler, post doctoral associate with the Division of Agriculture, the Dale Bumpers College of Agricultural, Food and Life Sciences and the Department of Crop, Soil and Environmental Sciences. “Every year, drought impacts soybean yield in some part of the U.S.”

Kaler is working with Dr. Larry Purcell who is the lead scientist on this large regional project funded by the United Soybean Board. Purcell is the Altheimer Chair for soybean research with the Division of Agriculture.

Soybean is one of the most widely grown crops in the world. Soybean production had over a $1.4 million economic impact in Arkansas in 2016, according to the 2017 Arkansas Agriculture Profile. Drought stress can lead to potential soybean yield loss in rain-fed areas. This variation in soybean yields due to drought is projected to get worse with global climate change.

“The goal of our research is to improve the drought tolerance in soybean using genomic and physiological mechanisms,” Kaler said.

Slow canopy wilting also has a high heritability and is a relatively inexpensive trait for drought tolerance, Kaler said.

Kaler said the alleles he has identified in his research associated with slow canopy wilting can help improve soybean drought tolerance by transferring those alleles to high-yielding, drought-sensitive cultivars using non-transgenic breeding methods. The breeding process is accelerated because molecular markers are used to identify the favorable alleles during the breeding process. The first crosses to move the slow-wilting alleles to a high-yield line were initiated this summer.

For more information about soybeans and drought tolerance, visit, https://www.uaex.edu/environment-nature/disaster/drought-resource-center.aspx.