By Ryan McGeeney
U of A System Division of Agriculture
Oct. 24, 2016

STUTTGART, Ark.  — Diamond and Titan, conventional long- and medium-grain rice varieties developed by the University of Arkansas System Division of Agriculture, should offer strong yields and other advantages to growers, according to preliminary data from this year’s rice performance trials. 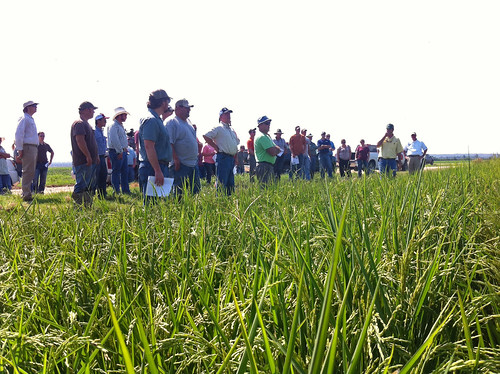 Jarrod Hardke, extension rice agronomist for the Division of Agriculture, said each performed well in a difficult growing year.

“They both seem to represent further yield improvement over previous releases,” Hardke said.

Diamond showed appreciable yield increases over currently grown long grain varieties including Roy J and LaKast and CL151, he said, adding that Titan showed particular advantages over other medium grain varieties such as Jupiter and CL272.

The preliminary data was drawn from two annual small-plot rice trial programs — the Arkansas Rice Performance Trials, or ARPT, in which 75 commercial and experimental rice cultivars were planted and closely monitored by Division of Agriculture researchers at five research locations with varying soil and climate. Of the 75 entries in ARPT, only the lead 23 commercial and experimental entries have been summarized to date. (Find past information on variety testing here: http://arkansas-variety-testing.uark.edu/rice.aspx)

Rice varieties also go through the Producer Rice Evaluation Program, known as PREP. This year, 20 cultivars were planted by researchers in nine counties. The difference is that in PREP, the cultivars grow in fields managed by a cooperating farmer in the same manner as the rest of the field surrounding the plot.

According to the preliminary ARPT data, the mean yield for Diamond long grain rice was 197 bushels per acre, and 201 bushels per acre for Titan medium grain. The mean for all cultivars grown at the four research station locations was 186 bushels per acre.

“The PREP trials, are all strictly on-farm, with a more or less ‘plant it and leave it’ approach,” Hardke said. “I don’t dictate anything — we simply plant it, and the growers manage the field as they would manage it anyway.

“We can come back and take notes — we learn as much as we can from it — but the main thing is to come back at harvest and see how all those cultivars perform under those management conditions, in a particular geography,” he said.

Hardke said the variation in soils and growing conditions throughout Arkansas makes developing reliable recommendations for rice growers across the state a challenge, but one he readily accepts.

“Probably what makes Arkansas so unique, as a rice-producing area is that we have a very broad range of production conditions,” Hardke said. “We have production areas similar to the Bootheel of Missouri, the Mississippi Delta, northeast Louisiana, in addition to many other production areas that are completely unique to us. So when we try to move to these on-farm trials and make sure we’re capturing all these different areas of the state and different production practices — there’s a lot of variability to try to capture, from different environments and production practices.”

Despite the positive data, Hardke cautioned interested growers to exercise prudence in adopting any new cultivar.

“These trials give us a lot of information — but we’re cautious and conservative about making anything out to be a silver bullet.’” Hardke said.

“I always remind everyone — you try a new variety,” he said. “Because whatever information we didn’t know about it, we typically learn in ‘year one,’ once it’s commercially available and planted in large fields, on a wider acreage, in some environments that we may not have had an opportunity to test in. And that fist year is when we find these things out, so I always recommend that people don’t get carried away.”

Hardke said he will continue to release additional preliminary data from the 2016 trials as it becomes available, until December, when the Division of Agriculture will publish its final findings from the trials.

Mention of commercial brands in this story does not imply endorsement.