LITTLE ROCK — As feral hogs become an increasing nuisance in the northern counties of Arkansas, farmers, land owners and other residents need to be aware of any local trapping or baiting ordinances that may be in effect in their respective areas. 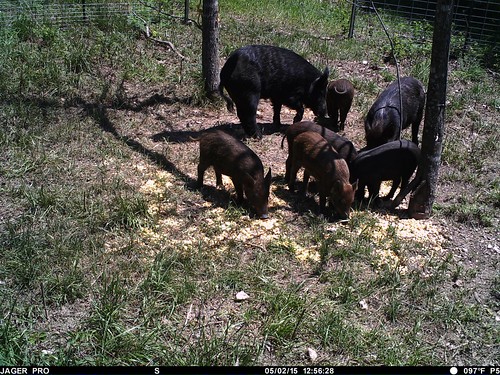 Becky McPeake, professor of wildlife extension for the University of Arkansas System Division of Agriculture, said luring hogs into corral traps using bait is the recommended method for capture and removal. However, the most commonly used bait is whole corn — which attracts a number of wildlife species in addition to feral hogs.

“Feral hogs are found in every county in the state,” McPeake said. “However, it’s becoming more of an issue in the northern counties, as the hogs continue spreading in that direction. It’s an area with a lot of cattle production, so we’re hearing more reports of pasture damage. But anywhere people have lawns, gardens or crops, they’re causing problems, including habitat destruction.”

Beginning in February of this year, Don White, Jr., professor and wildlife ecologist for the Division of Agriculture began assisting the Arkansas Game and Fish Commission in efforts to determine the geographical spread and prevalence of Chronic Wasting Disease in deer and elk throughout Arkansas.

Chronic Wasting Disease, commonly referred to as CWD, is a transmissible form of spongiform encephalopathy, which kills members of the deer family by altering proteins known as prions in the animals’ brains. Symptoms include weight loss to the point of emaciation, excessive salivation, loss of coordination and death. White said there is currently no vaccine for the disease, which results in 100 percent fatality.

Baiting is thought to intensify the spread of CWD among individual deer and elk through their increased contact at baiting sites, where infected animals can more readily transmit the disease. CWD prions are not known to be transmissible to humans or to other non-cervid species.

Additionally, baiting deer and elk is allowed when hunting on private land Sept. 1- Dec. 31. Baiting other wildlife, including nuisance wildlife, is illegal year round in the management zone.

The law states nuisance wildlife such as raccoons cannot be baited any time of year in the CWD Management Zone without permission, so it would be illegal if raccoons or other species were discovered feeding on corn intended to attract feral hogs.

Given this new law, the Arkansas Game and Fish Comission advises landowners and hunters who want to remove feral hogs in the 10-county CWD Management Zone to contact their local wildlife officer in advance regarding individuals’ intentions to use bait to trap nuisance hogs.

“It’s best to leave the gun at home when setting out corn to attract hogs in preparation for trapping, to avoid any misunderstanding,” McPeake said.