By Ryan McGeeney
U of A System Division of Agriculture
Oct. 7, 2016

LITTLE ROCK — The same summer rains that delayed rice harvest and triggered as much as $50 million in crop losses throughout Arkansas are having a different effect on forage producers, albeit in a different way. 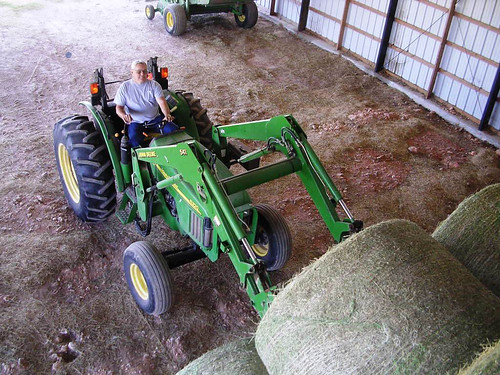 John Jennings, professor and extension forage specialist for the University of Arkansas System Division of Agriculture, said Thursday that heavy rains, especially throughout the month of August, prevented growers from harvesting Bermuda and other warm-season pereforage grasses.

“I had one producer tell me, tongue in cheek, that he saved a lot of time this year because he cut his first, second and third hay harvest all at the same time,” Jennings said.

In the plus column, Jennings said, the abundant rain has made for abundant production, in terms of bales harvested. However, because much of the hay grass across the state remained unharvested for a month or more past its ideal maturity date, much of that hay will be lower in protein and energy.

In many counties around the state, hay harvest is now in full swing. In Sharp County, Cooperative Extension Service chair Joe Moore said growers in his county planted approximately 4,000 acres of forage grasses, which have seen an abundant yield.

“Because of the tremendous rainfall, the production is up, and the prices are down,” Moore said. “I’ve seen prices all over the map, anywhere from $20 a round bale to $35.”

A typical round bale of hay ranges from about 650-900 lbs, Moore said.

As with many areas in the state, Moore said growers in their county had had “their fair share” of dealings with fall armyworms, an invasive pest that has affected both forage and residential grasses throughout the state this season.

“Most of our farmers are using the pyrethroid-based insecticides,” he said. “They are very, very short-lived in relation to the residual contact killing power they have. Most of the farmers try to get by as cheap as they can, and that’s why they’re having to spray three to four times.”

Moore said he, along with other Cooperative Extension Service agents and Division of Agriculture crop and pest specialists, have tried to convince growers to use longer-lasting insecticides that require fewer applications.

Although researchers have yet to determine how much forage production may be lost to the armyworms, Kelly Loftin, extension entomologist for the Division of Agriculture, said approximately 300,000-500,000 acres of hay grass in the state has suffered from armyworm infestations.

“For crop farmers that’s great, because they’re trying to get their harvest out, but for cattle farmers who are trying to grow that fall grass, so they can graze longer and not have to feed hay so early, it’s tough,” Jennings said. “The temperatures are cooling off, but now we’ve got no rainfall. That’s really going to reduce the fall forage production, and even though we may have a lot of that hay, we may be feeding it early, because of a lack of fall forage production.”

Jennings advised cattle producers to test their available hay for nutrient values to best calculate their livestock’s feeding needs for the coming winter.