(Newsrooms: with art at https://flic.kr/p/MJYNz1)

FAYETTEVILLE, Ark. – Disappearing lawns, pastures and hay meadows are the calling card of grass-hungry fall armyworms and this year, a 10-county demonstration by the Cooperative Extension Service pointed to a more economical way to manage this annual pest.

“2016 has been a record year for fall armyworms, an estimated 300,000 – 500,000 acres of bermudagrass pasture or hay was infested,” said Kelly Loftin, extension entomologist for the University of Arkansas System Division of Agriculture. “Hay producers and homeowners began battling this pest in bermudagrass yards and hayfields as early as mid-June – at least three weeks earlier than normal.” 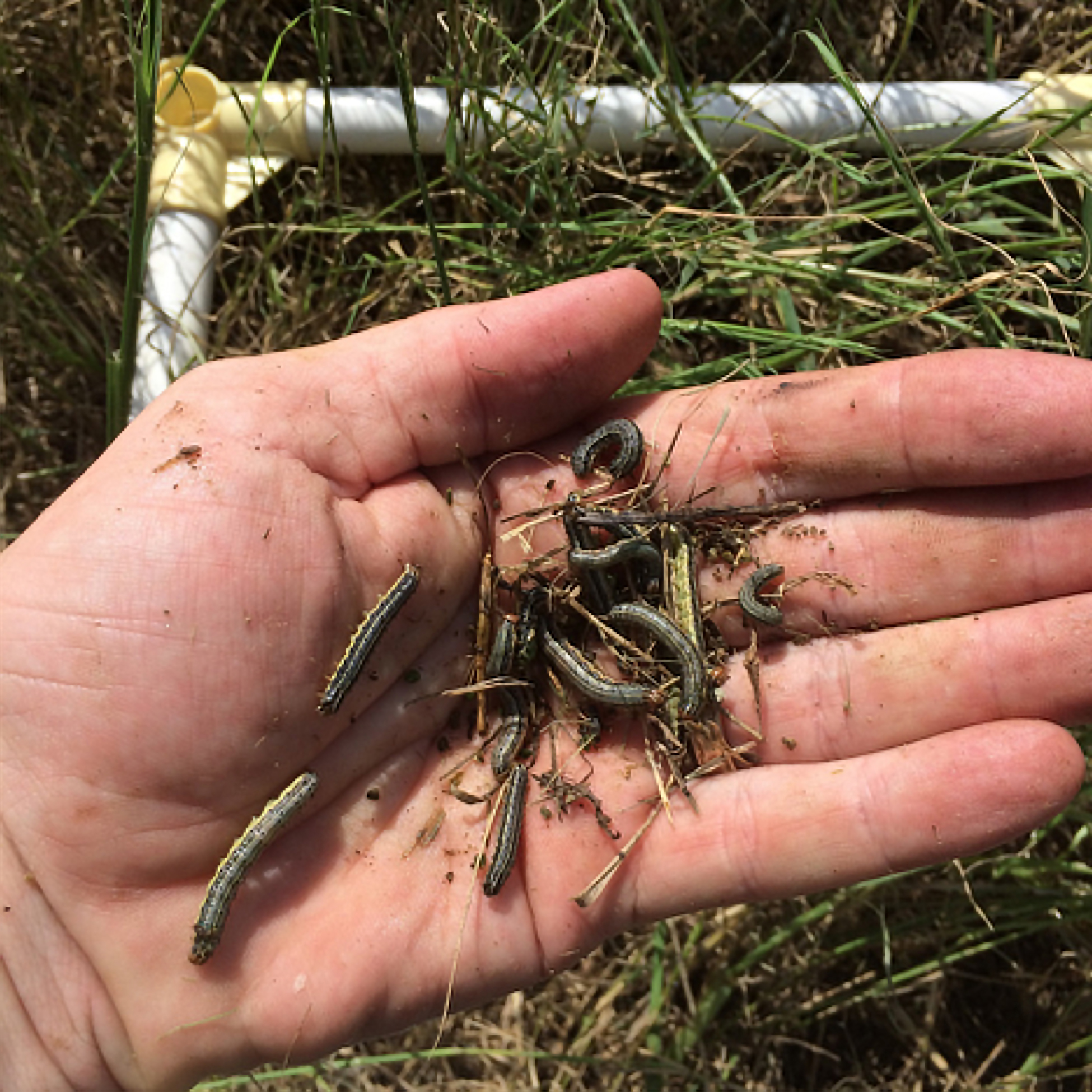 Loftin said that “county agricultural agents estimated that an average of 60 percent of bermudagrass was infested in the harder-hit counties.”

The demonstration in Perry, Yell, Izard, Cleburne, Pulaski, Pope, Sharp, Grant, Hot Spring and Miller counties compared a generic pyrethroid insecticide, lambdacyhalothrin, against two products with longer residual activity, known commercially as Besiege® and Intrepid®.  Besiege is a pyrethroid with chlorantraniliprole, a residual with staying power, and Intrepid is the growth regulator methoxyfenozide.

“With an armyworm infestation like this summer’s, farmers should look at longer-lasting products to avoid having to spray three or more times with short residual insecticides,” said Joe Moore, Sharp County extension staff chair for the University of Arkansas System Division of Agriculture. “If a farmer can save a couple of insecticide applications, the added cost of insecticide with more residual activity would be offset by the additional application costs – diesel, tractor wear and tear.”

Loftin said the generic pyrethroid will cost about $3-$3.25 per acre, while the longer-lasting products run $12-$13 an acre. Plus there’s the cost of labor and diesel to run the sprayer – and that is calculated at about $5 an acre.

“In general, the absolute minimum spray solution volume per acre is 10 gallons,” he said. “Higher volumes of spray solution usually result in better and more even coverage, especially with boomless sprayers.”

Gone, but not forgotten

In many areas fall armyworm infestations have subsided because of the drier conditions in September and early October.

“Although we may be enjoying a sigh of relief, farmers should not let their guard down just yet,” Loftin said. “Fall armyworms could be around until colder weather hits, at least through October or later.”

Loftin said fall is the time many are planting cool-season annuals such as winter wheat, annual ryegrass, rye or oats for cool-season grazing.

“These grasses are susceptible to fall armyworm attack and when heavily infested, the stand can be greatly reduced or lost,” he said. “Loss of wildlife food plots planted in cool-season annuals have already occurred in some locations.”

Mention of brand name products does not imply endorsement by the University of Arkansas System Division of Agriculture.

The University of Arkansas System Division of Agriculture offers its research and extension programs to all eligible persons regardless of race, color, sex, gender identity, sexual orientation, national origin, religion, age, disability, marital or veteran status, genetic information, or any other legally protected status, and is an Affirmative Action/Equal Opportunity.