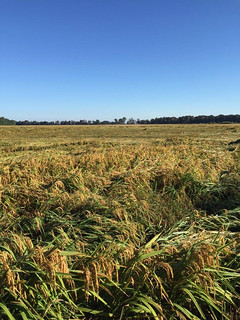 LODGED -- High winds push over, or "lodge" rice in a verification plot in Jefferson County, Arkansas. Taken Oct. 3, 2014. (U of Arkansas System Division of Agriculture photo by Ralph Mazzanti)

LAKE VILLAGE, Ark. -- A deadly line of storms that rumbled across Arkansas on Thursday night flattened some soybean and rice fields and could bring harvest to a halt for a few days, Cooperative Extension Service agents said Friday.

The storms that hit the state were part of a long line that swept from Texas to the Great Lakes. A Malvern man was killed when a tree fell on his house. The National Weather Service at Little Rock received scores of damage reports, including destruction of a farm shop in Lonoke County and a semitruck with chicken parts being blown over near Newport. More than 30,000 people were still without power Friday. Entergy said utilities in Georgia, Tennessee, Michigan and Louisiana heading to Arkansas to help restore electricity. 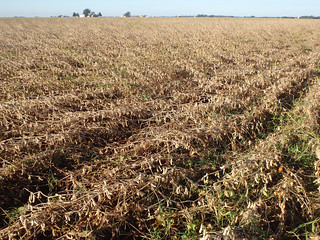 FLATTENED -- High winds from the Oct. 2, 2014, storm front flattened this soybean field in southeastern Arkansas. (U of Arkansas System Division of Agriculture photo by Ralph Mazzanti)

Jefferson County Extension Agent Anthony Whittngton said he had to step over downed powerlines to get to his truck Friday morning.

“Where I live in Sheridan, it is a mess! Trees snapped and down everywhere, power lines down all over the place,” he said.

“The county judge said his crews would be working through the night to remove trees from roads,” she said. Beck and her husband “Drove our fences in the rain with a spotlight to make sure our cattle couldn't get out. Now just sitting in the dark using the last of my cell phone battery.”

“I’m hearing reports of downed rice in the east-central and northeastern part of the state,” said Jarrod Hardke, extension rice agronomist for the University of Arkansas System Division of Agriculture. “That’s to be expected with the extremely high winds and possible tornadoes they dealt with last night.” 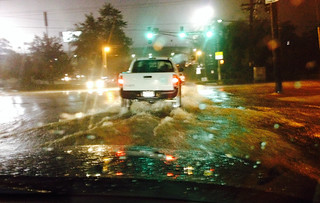 RAINY NIGHT -- Vehicles make a wake as they cross Markham Street in Little Rock near War Memorial Stadium on Thursday, Oct. 2, 2014. (U of Arkansas System Division of Agriculture photo by Mary Hightower)

That flattening of crops, known as lodging, also occurred in some soybean fields in southeastern Arkansas, Hardke said.

However, “rain we received will be helpful for wheat planting,” he said. “Soil conditions were too dry to plant wheat in most areas prior to this rain, so this rain will help add moisture and allow producers to get wheat seedbeds ready for planting.”

In Phillips County on the Mississippi River, Robert Goodson, extension agent for the University of Arkansas System Division of Agriculture said Helena-West Helena saw about .9 to an inch of rain.

“There was one report of a center pivot turned over due to wind,” he said. “Electricity was out about five hours in some places. This was the first rain in several days and farmers should be back in the field Sunday or Monday.” 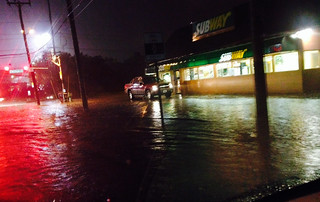 WATERY - Water covers a parking lot in Midtown Little Rock, on Thursday, Oct. 2, 2014. A strong line of storms marched across the state, killing one and leaving thousands without power. (U of Arkansas System Division of Agriculture photo by Mary Hightower)

In Chicot County in far southeastern Arkansas, rain gauges showed anywhere from a half-inch to 1.5 inches of rain.

“This will keep these guys out of the fields until Sunday or Monday,” said Gus Wilson, Chicot County extension staff chair for the University of Arkansas System Division of Agriculture.

He said growers in his county had finished up the corn harvest, were about three-quarters of the way through soybeans, halfway through rice, but had only started on cotton.

In northwest Arkansas, where drought persists, Washington County Extension Staff Chair Berni Kurz said he saw less than a quarter in at his house. “We could’ve used some rain. Maybe next time.”

For more information on crop production, visit your county extension office or see us online at www.uaex.edu or http://arkansascrops.com.