By Ryan McGeeney
U of A System Division of Agriculture
Nov. 22, 2019

FAYETTEVILLE, Ark. — As the world’s No. 1 agricultural exporter, the United States is responsible for laying down the first line of defense in the world’s battle for food safety and security. 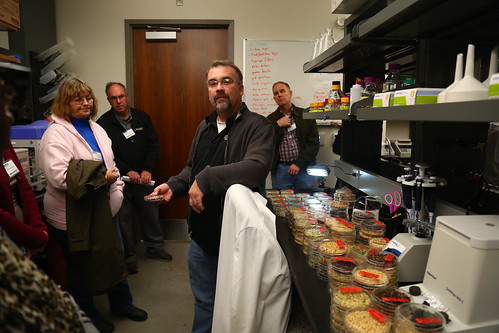 Among the most pernicious, naturally occurring threats to that safety are mycotoxins, a family of toxins generated by fungi attacking grains, nuts and other foods and commodities, impacting both public health and international trade. Researchers at the University of Arkansas System Division of Agriculture are leading some of the world’s most cutting-edge efforts to counter the prevalent toxins.

Burt Bluhm, associate professor of plant pathology for the University of Arkansas, is primary investigator and director of the Mycotoxin and Seed Borne Disease Research Lab. After operating out of the Rosen Alternative Pest Control Center on the UA Fayetteville main campus, the lab relocated in 2018 to the newly-constructed Don Tyson Center for Agricultural Sciences, several miles north.

Bluhm said that mycotoxins, while pervasive, are still relatively unstudied, compared to some of the other more pernicious headline grabbers in agriculture.

“Mycotoxins in particular have been overlooked in some corners of the research world,” Bluhm said. “There are a lot of reasons for that. In some ways, especially in corn, and in the United States, it’s historically been perceived as a ‘Southern problem’; Mycotoxins haven’t been as common in the big corn-producing states through the Midwest.”

Mycotoxins are, nevertheless, considered problematic by the United States and other countries from both economic and health perspectives. The European Union, for example, has stringent tolerances for the presence of mycotoxins in any grain shipment, especially imports, leading to the rejection of exports that would otherwise meet or exceed safety standards at the point of origin. In other areas of the world dealing with elevated food scarcity, mycotoxins are sometimes tied to severe illness.

“For the E.U., it’s primarily a trade issue,” Bluhm said. “But in developing nations in Asia and Africa, mycotoxins are a more serious problem. Where food security is an issue, where people have to eat whatever’s available, if the food’s contaminated with mycotoxins, you’ll see outbreaks of extreme illness and death.”

How the threat works

Mycotoxins are a family of toxins created when fungi feed on grain — either during the growing season, or when grain has been improperly stored. The fungi feed off the available carbohydrates, then secrete toxins into the colonized grain. In addition to corn, mycotoxins are found in other grains, tree nuts and cotton. There is a concern, Bluhm said, about possible mycotoxins in rice.

“There are really two issues at play,” Bluhm said. “One is that ‘a little bit of mycotoxin goes a long way,’ so to speak. So even if you have a low percentage of infected kernels, the ‘mycotoxin-per-kernel’ can be very high. So at the level of a truckload, when that grain is eventually homogenized, even a relatively low incidence of infection can lead to serious problems.

“The other issue is that while there are relatively few pathogens that produce mycotoxins of importance, the few species that do are extremely common. They’re ubiquitous, they’re everywhere. Anywhere grains are grown in the world, these fungi are naturally present.”

The path to Arkansas

Bluhm received his training in pathology, and mycotoxins specifically, at Purdue University in Indiana. When he arrived in Arkansas, he said, it was clear that the problem was more widespread in the state’s (and the region’s) corn crops that he had realized.

“It’s a complex problem,” he said. “And it’s a difficult problem to solve. I saw a really specific need among our stakeholders here in Arkansas and neighboring areas.”

Over the past decade, Bluhm’s lab has worked to map the genetic layout of the 20-30 fungi involved in creating mycotoxins around the world, searching for specific weaknesses to attack.

“We’ve worked toward developing transgenic resistance in grains that are susceptible to the toxins,” Bluhm said. “It’s in the early stages, but it’s promising so far.”

The lab is also working to develop biological control agents to combat mycotoxins.

“In some cases, if you apply a non-toxigenic strain of a species like you would a fungicide or insecticide, you overwhelm the fungus with that nontoxic cousin of what’s naturally out there,” Bluhm said. “It can be very effective.”

In October, the Division of Agriculture hosted the annual conference of the Council for Agricultural Science and Technology, commonly known as CAST. More than 70 representatives of academic, legal, governmental and other institutions attended the 2019 Annual Fall Board Meeting, touring facilities and projects chosen to highlight the university’s efforts and contributions to modern agriculture.

Dr. Mark Cochran, vice president for agriculture for the University of Arkansas System, said he selected Bluhm’s lab for conference attendees to tour because, in addition to the lab being fundamentally important to international food safety, it also speaks to CAST’s concerns regarding the advancement of science and technology within the world of agriculture.

“We tried to match our expertise with some of the issues CAST is addressing,” Cochran said. “CAST is organized into animal, plant and food working groups. A lot of the more complex issues are going to transcend all three of those areas.”

Cochran also noted that Bluhm has been broadly recognized for his work as a molecular pathologist with particular expertise in mycotoxins of grain, Cercospora diseases of corn and soybeans and the development of novel approaches for disease control.

“His approaches have included molecular genetics, gene editing and the use of RNA interference,” Cochran said. “His research has been supported by several nationally competitive grants.”