By Mary Hightower
U of A System Division of Agriculture
Nov. 19, 2019 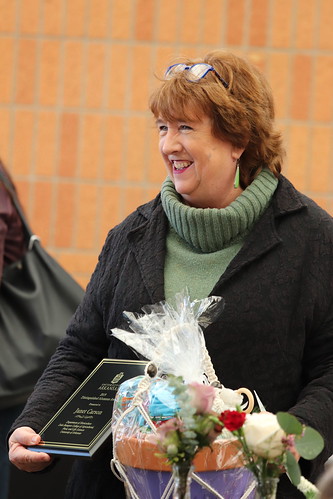 The annual event was hosted Nov. 11 by the horticulture department, part of both the University of Arkansas System Division of Agriculture and the Dale Bumpers College of Agricultural, Food and Life Sciences. Awardees are nominated by the public and selected by faculty.

Carson became known as Arkansas’ first lady of horticulture during an extraordinary 38-year career with the Cooperative Extension Service, which included establishment of the Arkansas Master Gardener program, weekly columns in the Arkansas Democrat-Gazette, books and radio shows. Her zest for sharing her knowledge led to her honor as the Horticulture Distinguished Alumni Award. The award recognizes exceptional professional and personal achievement and extraordinary distinction in horticulture, landscape or turf science.

Carson earned a bachelor’s degree in urban horticulture and landscape design from the University of Arkansas in 1980, and later earned a master’s degree in general agriculture with a horticulture minor at the U of A in 1992. She was introduced by a fellow extension retiree, Emeritus Professor Gerald Klingaman, as the recipient of the Horticulture Distinguished Alumni Award.

“Janet is a highly effective and tireless promoter of horticulture,” said Wayne Mackay, horticulture department head. “She had many notable accomplishments, including starting the Master Gardener program in Arkansas. Janet became the public face of the horticulture department through her radio, television, newspaper columns and magazine articles. She is truly one of our most distinguished alumni.”

Mike Richardson, a professor whose achievements are in turf science, introduced L. David Munsey III, as recipient of the Early Career Horticulture Alumni Award. The honor goes to those 40 years of age and younger and recognizes exceptional achievements in career, public service and/or volunteer activities that bring honor to the department. Munsey, known in horticulture circles for his trademark cowboy hat, is general manager of the Little Rock-based Better Lawns and Gardens.

“Over the last decade, David has been the driving force behind the incredible growth experienced at Better Lawns and Gardens,” Richardson said. “In addition to his business success, what really sets David apart is how he has given back to the overall horticulture industry in the state. Specifically, he has been a key leader for the Arkansas Flower and Garden Show, the largest horticultural event held each year in the state of Arkansas.”

Each year, the Arkansas Flower and Garden Show attracts thousands during its three-day run. The event is an educational outreach effort as well as a scholarship fundraiser.